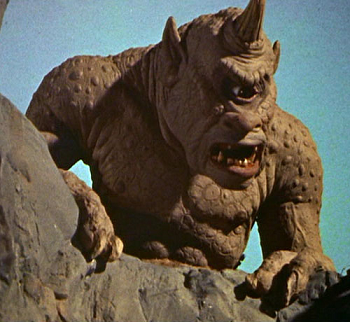 "I spy with my big eye...nobody?!"
"The cyclops is a one-eyed monster possessing a huge body and fearsome tusks. Fully grown cyclopes reach a height of twenty to twenty-five feet, and as a result of their large size they are prone to sloth and apathy. However, cyclopes can be inspired to ferocious action when they are angered, so act with caution in their presence."
— Dragon's Dogma
Advertisement:

Cyclopes are monstrous beings originating in Classical Mythology. Their most defining characteristic is their single eye, usually located in the middle of their foreheads. Besides that, they're usually depicted as giant, muscular humanoids, and often have additional monstrous traits such as tusks or a single horn above their eye.

Cyclopes are typically portrayed as dumb and brutish beings. At their most advanced they're usually barbarians and roving marauders; at their least, they're monstrous cavemen or barely above animals. They typically fight with crude and unsophisticated weapons such as Primitive Clubs as archetypal Smash Mooks. They also tend to be aggressive and carnivorous, and with few compunctions about eating people. Subversions tend to take inspiration from their mythical status as master smiths in service of the Greek gods, in which case they may be portrayed as reclusive Ultimate Blacksmiths. Some works will combine these two archetypes, either by having them as distinct kinds or populations or by having the modern primitive brutes be descended from a fallen empire ruled by much more advanced, skillful cyclopes.

They're often linked in some way to Ancient Greece or a Fantasy Counterpart Culture thereof. They may also be tied to classical gods or stand-ins for the same, especially Poseidon, who was their progenitor in the original myths, and Hephaestus, in whose forges they were said to work.

Subtrope of Cyclops and Our Giants Are Different.

An actual Cyclops, sealed within the isle of Thisvi.

An actual Cyclops, sealed within the isle of Thisvi.