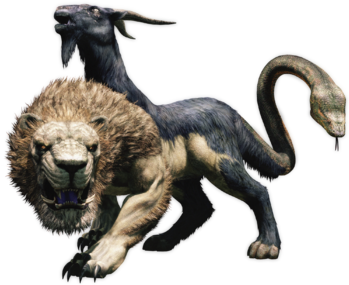 Don't even ask what its internal organs look like.
Advertisement:

The Chimera (also spelled Chimaera, from the greek Chímaira "she-goat") is a legendary beast from Classical Mythology, said to be one of the many offspring of Echidna and Typhon, alongside Cerberus and the Hydra. First referenced by Homer in The Iliad, and later killed by the Greek hero Bellerophon, it is most well known for being a three-way mixture of a lion, a goat, and a snake. Due to its mixed animal nature, the term chimera has since often been used as a way to classify a fictional creature with traits of various different animals. And, in modern biology, it is also used to describe a single organism that is a fusion of at least two different species, such as the Geep — a fusion between a sheep and a goat.

The most common depiction of a chimera is that of a beast with a lion's head and body (despite being female, it is commonly shown with a male's mane), a venomous snake instead of a tail and a fire breathing goat's head protruding from its back. While the design is altered a bit on occasion (the traits are switched around; or the creature sometimes features new appendages such as, most commonly, a goat's hindquarters, a pair of wings, a snake head, a fourth dragon's head, a regular dragon's tail, etc.), it is still mainly composed of a lion, goat, and snake. Another common depiction is a one-headed variant depicted with a lion's head, a goat's body and a snake's tail.

The chimera is often linked to disasters and volcanic eruptions. Seeing one was said to be an omen of disasters, such as the aforementioned volcanic eruptions or violent storms. It was said to live in Lycia, Turkey near the volcano of Phaselis (named Mount Chimaera), which is most likely where the monster was first thought up. It's believed that this volcano and Lycia's mysterious ground fires (caused by the permanent gas vents surrounding the area) lead to the Chimera being given its fire breath.

It should be worth noting that "chimera" can be used to refer to any sort of creature with traits from more than one animal — that is, what this wiki means by Mix-and-Match Critters. However, this page will primarily focus on the Greek version.

Compare to Flesh Golem (a manmade creature, with different body parts stitched together).

The Chimera appears as a Mini-boss in God of War 3 & God of War Ascension. Unlike most incarnations of it however, the goat head is the dominant one.

The Chimera appears as a Mini-boss in God of War 3 & God of War Ascension. Unlike most incarnations of it however, the goat head is the dominant one.