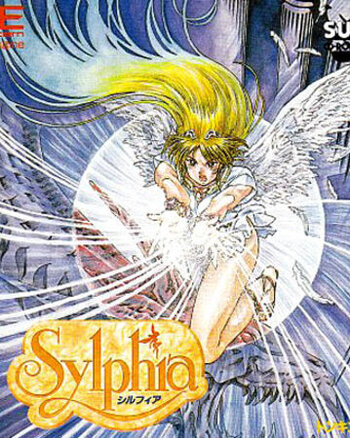 A long time ago, when human beings and gods lived together...

In a Medieval Fantasy Kitchen Sink inspired by Ancient Grome, Hades, upon being defeated after an attempted revolt, has unleashed his forces into the human world.

The Gods led by Zeus are unable to intervene as Hades' legion of monsters lay waste to the land. But in a human village, a young warrior woman named Sylphia stood her ground, battling legions and legions of orcs to defend the villagers, until she had slain every one of her attackers, sustaining mortal injuries in the process. Seeing her determination in fighting the forces of evil, Zeus decides to embue his powers in the dying Sylphia and have her take on Hades' forces in his stead.

Sylphia is a 1993 medieval-fantasy inspired Vertical Scrolling Shooter developed by Compile (the same guys behind the Aleste series) and published by Tonkin House for the PC Engine CD, in which players assume the role of the titular heroine, now granted the abilities of flight and firing elemental-based projectiles thanks to Zeus, as they control the heroine in blasting through hordes and hordes of monsters.