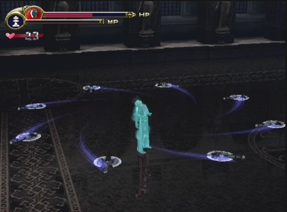 An attack with some resemblance to a Macross Missile Massacre. Unlike normal shrapnel, which expands out in all directions, reverse shrapnel focuses its explosive, glowy death into a protective ring or sphere around the character who brought it forth, with the fragments then homing in on nearby enemies. It could be floating weapons, shards of Pure Energy, or other kinds of fragments.