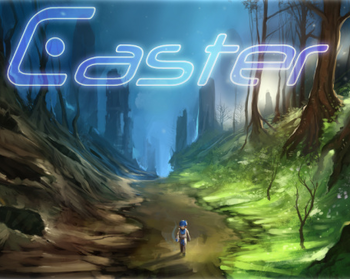 Caster is a Third-Person Shooter with RPG Elements by Elecorn Studios for the PC. The game is episodic, with two episodes released so far. You play as a rookie Caster fighting bug-like aliens called the Flanx. You start with just a slow-firing Pulse weapon and an extremely brief dash, but by the end you have six devastating weapons, the ability to jump halfway across the map, dash near-constantly, run up walls, and even run on water. There's also two weapons that can raise and lower terrain, and your enemies can use these as well, so after a few levels fights become frantic affairs as you dash and circle-strafe wildly while ripping big craters in the landscape.