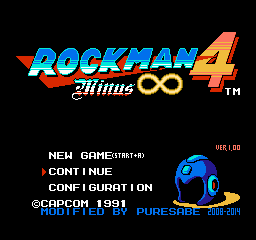 "Ah, the wonders of 6502 assembly hacking. Where most people would prefer making Mega Man fan games in Flash or other similar platforms, there are people such as Puresabre [sic] and other Japanese hackers that rework their entire games with extensive reprogramming."
—YouTube comment by LuwiigiMaster

Rockman 4 Minus Infinity is a Rockman 4 ROM hack by a Japanese person who goes by PureSabe.

It keeps the same basic plot as its source material, while adding a number of new features, such as all-new levels, bosses, and music, as well as a modern save file system. It also contains plenty of Shout Outs to other games, including enemies from other Mega Man titles, and many level design homages. Most of this stems from its usage of assembly hacking, allowing for deeper customization than other ROM hacking tools

The game is complete, with version 1.00 being released in December 2014. This site

contains lots of information on the game.

Once you're done filling up, you get to watch Dr. Wily do the same thing.

Once you're done filling up, you get to watch Dr. Wily do the same thing.