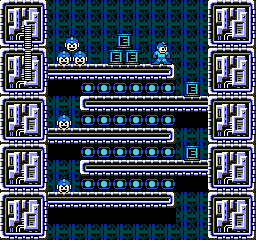 Wow, look at all those bonuses! You're

In a well-paced game, health packs and ammo cartridges can feel like gifts from the Heavens. They're granted with care, and by the time you come across a little box with a red cross painted on its side, you are likely to make good use of it.

So why does an experienced gamer start sweating when they come across a room full of medical supplies, armor, ammo and weapons? Why are they suspicious of this bounty? Because the gamer knows what this generosity entails. In the next room, they're going to need all of this, as they're about to get their ass kicked by a horrific Eldritch Abomination with twenty thousand hit points and whose very existence will cause the player's optic nerves to shrivel and die. Have fun!

The game designers are being nice and giving you a chance to gear up and heal up before The Unpronounceable One eviscerates you and sticks your head over its mantle. Also prevents the player from having to backtrack through the dungeon to heal themselves up to full. Bonus Dungeons tend not to feature these before the Bonus Boss, as they're intended to be extra-challenging. It's not necessarily limited to Boss Battles; Suspicious Videogame Generosity may occur before the Death Course or any other noticeably difficult segment. If a free, re-spawning extra life appears right after a checkpoint, chances are the next segment isn't going to be pretty.

Sometimes referred to as a "boss fountain" when directly preceding a boss fight.

An Acceptable Break From Reality and Anti-Frustration Feature. Compare After Boss Recovery, where the stash is found after the fight's over, and Foreboding Architecture, where you can predict the extra difficuly based on the level design. Often overlaps with Healing Checkpoint when a Save Point is included; these same genre savvy gamers treat such a Save Point as an Ominous Save Prompt.

Subtrope of Blatant Item Placement. See also Intrepid Merchant, where a merchant or store in a video game is in an unlikely location, but one where you'd need it.