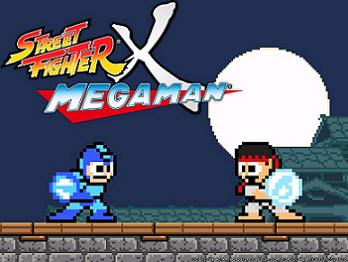 A crossover made in heaven.
Having fought countless robot masters over the years, Mega Man is ready to lay back, relax and enjoy his 25th Anniversary. Getting wind of this, Ryu and his fellow Street Fighters want one last battle before they let their own anniversary finish. Charge up your mega busters and stretch out your lightning legs, this is Street Fighter X Mega Man!
~ The story included with the README File.
Advertisement:

Street Fighter X Mega Man began life as a fan game by Seow Zong Hui. He created the game in a similar style to the NES era of Mega Man and the retro-styled Mega Man 9 and Mega Man 10. After showing the game off to Capcom executives, the company offered him official support and released the finished product December 17th — the date of the 25th anniversary of Mega Man's release — as a free, PC-only game.

Capcom has said that it could end up released for other platforms.

Capcom has also released a patch

that fixes some bugs in the game, adds in a Mega Man 2-style password system and adds a new challenger.

Rather than Robot Masters, Mega Man faces the following World Warriors as bosses: