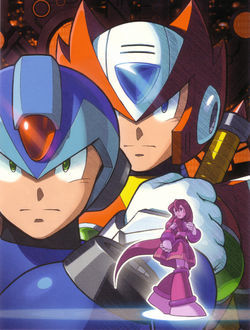 Mega Man Xtreme 2 is the second and last entry of the handheld spin-off Mega Man X series, and was released on the Game Boy Color on July 2001 in Japan, October 2001 in North America, and February 2002 in Europe. Chronologically it takes place sometime between the events of Mega Man X3 and Mega Man X4, and includes enemies and gameplay elements from Mega Man X, X2, and X3.

In the year 21XX, reploids across the globe are having their programming and personalities suddenly erased, leaving them as hollow and lifeless shells. The phenomenon was named "ERASURE", and eventually led X and his partner, Zero, to Laguz Island to discover what is the cause of the event.

With assistance from Iris, a recent addition to the Maverick Hunter team by Repliforce, X and Zero make it to the island to discover a number of their old enemies have been mysteriously revived as guardians of the island. They are then confronted by Berkana and Gareth, self-proclaimed Soul Erasers who have been using the DNA Souls of reploids to become the most powerful reploids in the world, and are eager to test their newfound powers against the legendary Maverick Hunters, X and Zero.

In Extreme Mode, all eight Mavericks from the previous two missions can be fought in any order with either X or Zero, although only the character who actually beats the Maverick gets their weapon.