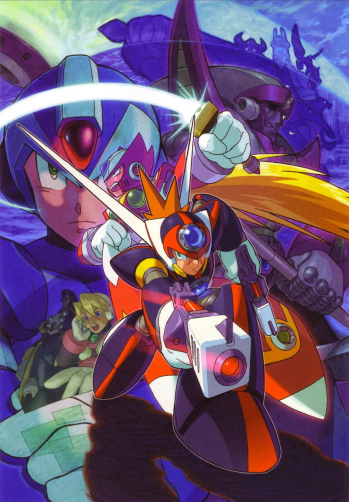 "In any case, I want Axl back. Now, don't you worry. I know he won't come back easily. So how about this? Like you, we are hunters. We've trashed our share of Mavericks. So how about a duel? A duel to determine who the real Maverick Hunters are. I'm sure you won't mind if we use the Mavericks that we've captured so far. So, the last one standing wins! If we lose, we'll surrender Axl to you. And if we win? Well... We'll leave that to your imagination!"
— Red, Mega Man X7.
Advertisement:

The seventh entry in the Mega Man X series, Mega Man X7 was the series' first appearance on the sixth console generation (PlayStation 2 and PC* in Korea) and its first and only attempt at true 3D gameplay, which achieved middling results at best. This game is also notable for introducing Axl, a third protagonist in the series who was a bit of a Scrappy until the next game came along.

The earth has finally recovered from the Eurasia crisis, and things have returned to somewhat normal. However, X retires from the front lines of the Maverick Hunters, as he tries to find a truly peaceful solution to the Maverick problem. This power vacuum allows Maverick crime to rise, leading to a new vigilante syndicate called Red Alert forming to pick up the Hunters' slack. Then one of the members of Red Alert, a mysterious Reploid named Axl, suddenly flees the organization. He runs into Zero, who takes him into custody.

Red, the leader of Red Alert, is not happy about this, and challenges the Maverick Hunters to a contest over custody of Axl. Releasing their captured Mavericks and Mechaniloids, Red proposes that whoever destroys the most Mavericks — including each other's forces — gets to keep Axl. Axl feels responsible for the chaos, and tags along with Zero to help him out in the conflict.

The game follows the usual formula of its predecessors as players complete a series of stages and defeat the bosses to gain their special attacks. In an attempted to bring the Mega Man X series into 3D, Mega Man X7 combines the series' 2D run-and-gun gameplay with a 3D third-person shooter and changing between the two gameplay styles at key points of the game. In addition to gaining the bosses' abilities, players can rescue injured Reploids scattered throughout the stages. Like in the previous game, some of them can be found easily in some stages, while others may require scouring through every corner of a stage...and must do so very quickly in this game as anything — enemy fire and stage hazards alike — will kill them in one hit. Rescuing some of the injured Reploids may reward players with extra lives, Life or Weapon Ups, or a Power-Up Chip that can augment the Maverick Hunter's abilities. This game also introduced the ability to bring two Maverick Hunters as a team and swap between the two during gameplay, however, only Zero and Axl are available and if any of two team members are defeated, the player loses a life regardless of their partner's condition.

The Mavericks of Mega Man X7 are: