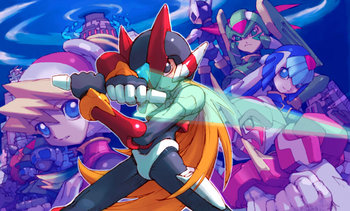 Mega Man Zero is a video game created by Capcom and Inti Creates for the Game Boy Advance in 2002. It's the first installment in the Mega Man Zero series, taking place a hundred years after the Mega Man X series.

Neo Arcadia, the last hospitable city on the planet, enacts a policy that demotes its Reploids into second-class citizens. This is naturally met with resistance from the Reploids, but they were branded Maverick and persecuted as a result. One cell of resistance fighters, led by human sympathizer Ciel, decide to seek out the legendary Maverick Hunter Zero. Found deep inside a derelict laboratory, Ciel wakes Zero up (having no memories of his past adventures) and joins the Resistance's cause, even if it means going up against his old comrade X, the ruler of Neo Arcadia.

The game is a platformer like the previous Mega Man games but introduces several new concepts, such as Cyber-elves, one-time helpers who can increase Zero's abilities and a rank system depending on how well Zero is performing.