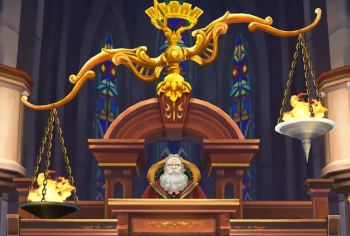 Fire has weight?
Steven Grant: She's weighing our hearts on the Scales of Justice and the Feather of Truth. You see, the ancient Egyptians believed that the heart was the sign of who you really were in life. If the Scales balance by the time you end the journey, then a soul is permitted to pass into the Field of Reeds.
Marc Spector:... What if they don't balance?
— Moon Knight (2022), "Asylum"
Advertisement:

The weighing of a case's support and opposition can be tricky. In fact this has been exemplified with using scales as a symbol. This trope is also Older Than Dirt having existed since the ancient Semitic religion

with their god of justice Shamash to whom the scales were held sacred. Along with Shamash the scales were also affiliated with Osiris, Anubis, Maat, Isis, Thoth, Themisnote Along with Lady Justice she owned the Tropenamer., Dike, Astraea, Nemesis/Invidia, Adrestia, Justitianote Justitia's Greek counterpart is either Themis or Dike., Archangel Raguel and Lady Justice

note Along with Themis she owned the Trope Namer., who was more or less a Allegorical Character heavily based off of Justitia with some modern influences. Now a days it's mostly a Forgotten Trope.

This trope actually has nothing to do with the Sliding Scale of Law Enforcement, though they can meet.