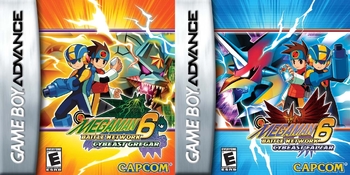 Lan and MegaMan have to part ways with their friends when their father receives a job transfer to Cyber City, a highly advanced part of Electopia that is home to many technological marvels. However, Cyber City is also the resting place for two powerful and incredibly destructive programs know as Cybeasts. A new criminal organization soon emerges and captures one of the Cybeasts, with the other being absorbed into MegaMan. Alone and in unfamiliar territory, Lan and MegaMan must discover the secrets of the Cybeasts and the plans meant for them before it's too late.

The game replaces the Double Soul system with the Cross System. Just like its predecessor, Cross allows MegaMan to take on the combat abilities of another Navi, but there is no longer a time limit to its use and each one can be accessed without sacrificing a chip. However, every Cross has an elemental weakness, and getting hit by it ends the transformation. MegaMan can also use Beast Out, channeling the power of the version's Cybeast for a limited time. The two transformations can even be combined into a Cross Beast for more power.