Heal It with Water 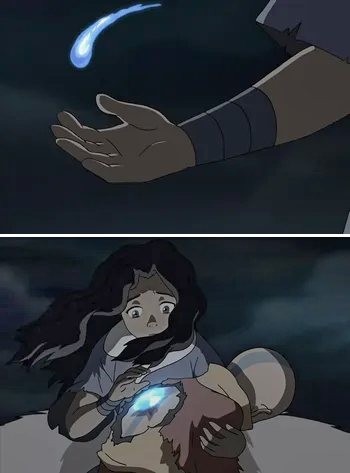 Pure, clean water washing away dirt and grime is an age-old idea, and water is a fairly universal symbol for spiritual healing and restoration. In addition, all organic life on Earth is water-based and terrestrial life is thought to originate from the oceans. So it's no surprise that fiction associates water with health and life — specifically, it is often used to heal. Water will have restorative properties (such as recovering health or mana), treat injuries (even internal ones that the water wouldn't even touch), and cleanse a body of poison and other toxins.

One common way to do this is to make healing a subset of water-based powers: healing spells will be water-aligned, and individuals with a water-themed powerset can use their control over water to pull double duty as the team medic (or conversely, the team medic is likely to have an affinity for water magic for the same reason). This may specifically involve the manipulation of internal fluids to repair bodily damagenote There's a tiny grain of Truth in Television to this, in that immediate immune responses often rely on how fast immune cells — which are carried by blood and lymph — can arrive at the site of damage. Because of this, if there's a Four-Element Ensemble or Elemental Rock–Paper–Scissors, expect the healer characters to belong to the Water element.

Heal It with Water relies on the idea of Cool, Clear Water as cleansing and life-giving. Since Water Is Blue, this also allows for the Color Motif of water being calming and soothing. Many real-life first aid procedures such as burn treatments and wound washing note although running water alone is not enough to clean a wound; a disinfectant is necessary — water can even infect a wound without it rely on running water, and in the specific case of some poisons, water is used to "flush" them outnote Do Not Try This at Home! Consult a doctor or toxicology specialist before trying anything. And of course, drinking sufficient amounts of water is essential to one's health.

A useful application of Making a Splash, and may be utilized by a White Mage and / or those with Healing Hands, who tend to be feminine women. Super-Trope to Healing Spring, a body of water that specifically has healing properties. Compare Healing Vat and Healing Potion, which are liquids that will recover health, but may be comprised of something other than water, and Swiss Army Tears when they are used in a healing capacity. Contrast Kill It with Water and Kill It with Fire; see also Heal It with Fire and Healing Winds. This can apply to Fire/Water Juxtaposition if water's healing properties are played in contrast to the destruction caused by fire.

Not to be confused with aqua vitae — see Hard-Drinking Tropes for that. Or Heal It with Booze.

See also Holy Water, which will may be given restorative, curative or even resurrective properties in fiction.