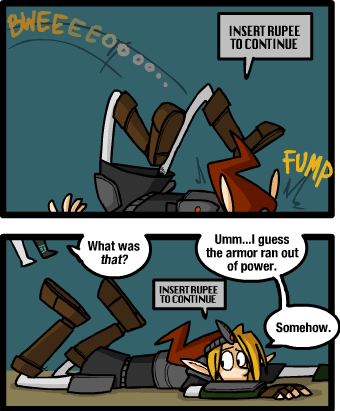 Finding your party in a particularly sticky situation? Make like a government and throw money at the problem. Literally!

To put simply, these powers don't drain your ammo, mana, or the like; instead they consume your money or similar collected resources. Such an ability may literally require money to work (such as offering a bribe to the enemy or physically tossing coins to attack), or else it simply reduces your cash with each use.

Given that money is a consumable, sometimes scarce resource (though still more available than your precious Hit Points), Casting From Money should be somewhat more powerful than standard attacks — or else the player wouldn't bother. On the other hand, making such a move too powerful can create a Game-Breaker, especially if using it allows you to earn more than you spend.

Occasionally can be justified through Practical Currency. Often a form of Gameplay and Story Segregation, if the money is permanently consumed even when the ability does not necessarily destroy it (like tossing coins). Energy Economy is when this trope applies to everything - characters may use it to power... powers... but so does everyone and everything else.

Note: simply buying a power or an attack does not count as this trope.

Compare Cast from Hit Points, Cast from Experience Points and Money Mauling, where the moolah is used as the weapon but the attack does not necessarily drain any fund. See also Cash Gate, Throwing the Distraction. Often used to reduce the impact of Money for Nothing.

In battles in The Origami King, you can use coins to call on the Toads to give a variety of helpful effects including healing and providing a trail. You can also use them to extend the timer.

In battles in The Origami King, you can use coins to call on the Toads to give a variety of helpful effects including healing and providing a trail. You can also use them to extend the timer.