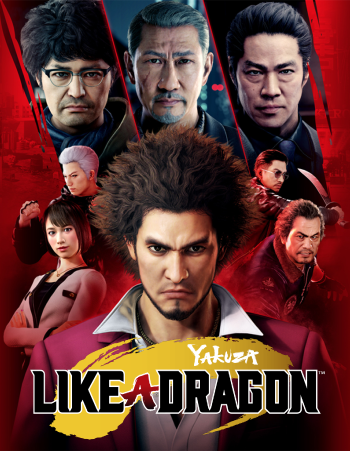 Yakuza: Like a Dragon, known in Japan as 龍が如く7光と闇の行方 (Ryu ga Gotoku 7: Hikari to Yami no Yukue, meaning Like a Dragon 7: The Whereabouts of Light and Darkness), is the eighth major entry in the long-running Like a Dragon series. It released in Japan on January 16, 2020 on the PlayStation 4, with a Western release on the Xbox Series X|S, PS4, Microsoft Windows, and Xbox One on November 10, 2020, and PlayStation 5 release on March 2, 2021.

This is the first game in the main series following Yakuza 6, the final entry in the story of the legendary Dragon of Dojima, Kazuma Kiryu. Taking over as the leading man of the series is Ichiban Kasuga, of the Arakawa Family within the Tojo Clan. When the family's captain finds himself on the hook for murder, Kasuga happily takes his place, turning himself in to the police and taking the rap for a crime he didn't commit in 2001. Eighteen years later, he finishes his sentence and returns to civilization, only to find no one to welcome him home. Desperate to find out why he was forgotten, he searches for his family, only to receive a bullet from his leader for his troubles.

Now in the coastal city of Ijincho, Yokohama, Kasuga finds himself with more questions than answers, no one to turn to, and danger around every corner as the fragile peace between the local organized crime groups is threatened by forces within and without. He must now fight his way from rock bottom back to Kamurocho, and find out why the Tojo Clan has forsaken him. Thankfully, he won't have to fight alone: joining him in his journey are a motley crew of misfits from all walks of life, including Yu Nanba, a homeless back-alley doctor; Koichi Adachi, a disgraced former detective; Saeko Mukouda, a tough-as-nails cabaret club mama and barmaid; and others.

Yakuza: Like a Dragon represents the most radical shift of gameplay in the series's history, changing from a free-roaming action-RPG to a more traditional JRPG. A menu-based battle system was originally teased in an April Fools video

Even with a new battle system, the heart and soul of the Yakuza series remains strong, as the game weaves a hard-hitting crime drama story with amusing sidequests and a plethora of other amusements to participate in, from new diversions such as go-kart racing to returning classics like karaoke, hostess clubs, and arcade games.

Much like the previously-released spinoff title Judgment, Yakuza: Like a Dragon features an English dub — the first game in the main series to do so since the 2006 original — in addition to an option for the original Japanese voice-overs. Headlining the dub cast are Kaiji Tang as Ichiban Kasuga, Greg Chun as Yu Nanba, Andrew Morgado as Koichi Adachi, Elizabeth Maxwell as Saeko Mukoda, and George Takei as Masumi Arakawa.

In May 2021, Sega announced that with the success of Like A Dragon, the Genre Shift to turn-based JRPG would remain for all mainline games for the series

. The original action-RPG brawler format would remain, however, for the Judgment spinoffs, including Lost Judgment.

Not to be confused with the film of the same name, which loosely adapted the first game.