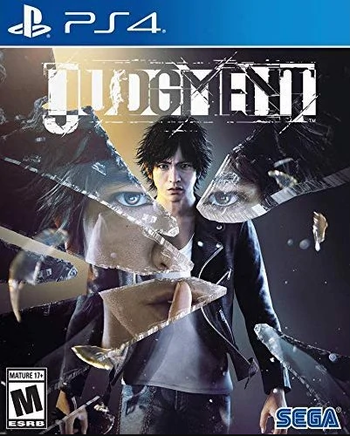 The legend of the Yagami Detective Agency unfolds.
"You still wanna sue? Y'know, you won't know what hit you..."
— Takayuki Yagami
Advertisement:

Judgment, known in Japan as JUDGE EYES: Shinigami no Yuigon Translation The Reaper's Testament is a "courtroom thriller" Action-Adventure game by Ryu Ga Gotoku Studio, the same studio behind the critically acclaimed Yakuza series. It released on the PlayStation 4 in Japan and for the Asia-Pacific region in December 13, 2018, with a Western release to follow on June 25th, 2019. While Japanese sales for the game stopped in March 2019 due to Pierre Taki's arrest, Sega announced in May 2019 that a new version of the game will be released on July 18, 2019, with the new character model and Japanese voice actor for Kyohei Hamura.note The scandal over Taki's arrest would not have an impact on the game's Western release. It is a Gaiden Game to the main Yakuza games, ignoring almost all of that series' plot elements in favor of telling its own detective story set in the fictional Tokyo district of Kamurocho.

Judgment places players in the role of Private Detective Takayuki Yagami (portrayed by SMAP alumnus Takuya Kimura) who is on the hunt for a mysterious serial killer. Once a promising defense attorney, his reputation would be permanently tainted after one of his old clients, acquitted of a previous criminal charge, was caught by police for murdering his girlfriend. As such, he's forced to work as a PI in order to make ends meet and take on odd jobs from time to time. When an everyday case leads to a link between his past and the serial killer. Yagami is thrust into the murky world of the Yakuza in order to find out the truth of who set him up.

To get to the bottom of this deadly mystery, Yagami will need to use every tool and skill as a PI at his disposal; tailing suspects and chasing them down if the need arises, taking incriminating photos with his phone and remote-controlled drones, cornering persons of interest with damning evidence, and fighting his way to the truth — through brute force, if necessary.

Judgment is the first major release of the Yakuza series after Yakuza 6, which concluded the story of the series' main protagonist Kazuma Kiryu, and represents a sharp contrast in narrative: while previous games focused on characters who lived outside of the law, Judgment has players in the role of a private detective attempting to solve crimes. This carries over into the gameplay, as well; in addition to investigating crimes and pursuing criminals, players must also take care to stay within the bounds of the law — even if it means running from the authorities.

Beyond the new characters and story, the core of the Yakuza series is ever-present in Judgment as players delve into a hard-hitting criminal drama story, while fighting off ruffians on the regular with both martial arts and environmental objects. Players can also pursue more light-hearted sidequests and engage in numerous mini-games, from arcade games to drone racing.

The sequel, Lost Judgment, was released worldwide on September 24th, 2021, a franchise first for a Ryu Ga Gotoku Studio game, across the PlayStation 4, PlayStation 5, Xbox One, and Xbox Series X|S. This time around, Yagami travels to Ijincho to solve a brand-new case.