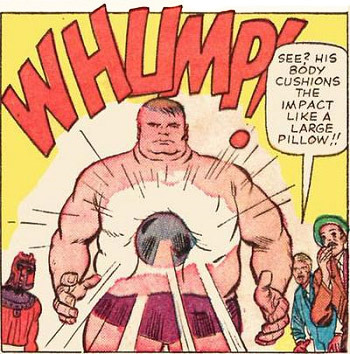 "Nothing moves The Blob!"
"Your sword only pierced through my belly fat and one kidney: a flesh wound! Have at you, sir!"
— Marco (describing medieval soldiers), Animorphs
Advertisement:

In fiction, fat doesn't necessarily mean the character is out of shape — it's body armor. A fat character will often be resistant or even entirely impervious to damage because of their layers of blubber. Punches will be absorbed or deflected, often with a comedic BOING, and in rare cases, bullets or other projectiles will be diverted. They might even go out of their way to build up fat so they can fight more effectively.

This is Truth in Television, but not to the extent that fiction portrays it. It might add some cushioning against a punch or twonote (it also protects against cut wounds and shields nerves and blood vessels in a fight), but it does nothing against a bullet. However, characters with Kevlard seem to bypass this downside entirely.

Kevlard often, but not always, overlaps with Acrofatic, Stout Strength and/or Mighty Glacier. More often than not, it's applied to villainous characters rather than heroic ones, usually because it's meant to be an intimidating display of size trumping skill. Often played for laughs, and almost always a set-up to having the characters discover the Achilles' Heel of the tub of lard in question. Usually, in its less serious incarnations, the ability to repel damage with fat is presented as an inhuman superpower.

It's important to make the distinction between this and Mighty Glacier: Mighty Glacier characters are simply those who are strong and slow, and it more often applies to huge, muscled characters. Kevlard, however, refers specifically to when a character's body fat is the source of their durability. That said, a Kevlard has a high probability of ending up as a Mighty Glacier or a Stone Wall regardless, as it's often difficult to envision such a character as fast or fragile.

In Video Games, many Giant Mooks and Smash Mooks will use this trope to justify their toughness considering that they are usually wearing less armor than their counterparts.

In the Fist of the North Star movie, Heart, a henchmen of Jagi, uses his fat to block the attacks of martial artists. Unfortunately for him, Kenshiro knows the Hokuto Juu Hazan (North Star Soft Ripping Slash) technique, which moves his fat so his pressure points are accessible.

In the Fist of the North Star movie, Heart, a henchmen of Jagi, uses his fat to block the attacks of martial artists. Unfortunately for him, Kenshiro knows the Hokuto Juu Hazan (North Star Soft Ripping Slash) technique, which moves his fat so his pressure points are accessible.