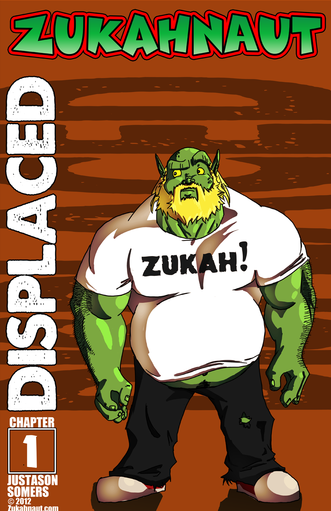 "Potatoes produce a toxin when they get old, spend time in the light or suffer physical damage. The built-up toxin turns them green. After that they will mess you up. Pain. Diarrhea. Coma. Death. I was already old. Today was the most sunlight I've seen in years. Now this knob is set on beating me? I dunno about the potato... But I'm feelin' green as hell."
— Zukah, Zukahnaut Chapter Three, page 7.
Advertisement:

Zukahnaut is a Canadian action/adventure webcomic by Otty Justason and Sonya Somers. It follows an alien recluse who decides to give living out in the open a shot. After over 50 years of skulking out of sight on Earth, Zukah is lonely, rude, out of shape, and out of his mind... but he's working on it.

The world Zukah joins turns out to be more accepting of a huge green alien than he anticipates, thanks to a recent development known as Portals. These Portals are opening, apparently at random, all over the world and spitting out people and things from what appear to be parallel universes. Zukah gets sucked into this mystery alongside the likes of Darius Douglas (a scrubby and good-hearted Action Social Worker) and Darius' sister Daphne (a veterinarian-turned-sawbones) as they face monkey centaurs, goat men, cyclops giants, sea orcs and immortal vikings.

The webcomic is published weekly here