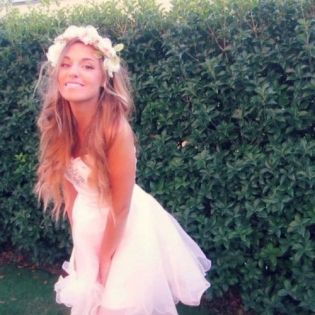 The tip of her iceberg.
Advertisement:

, formerly known as CutiePieMarzia, is an Italian YouTuber. Her channel is mostly fashion-centric, though she also posts a large variety of non-fashion related videos, like food recipes, makeup tutorials, monthly favorites, and the occassional vlog (generally when she is travelling). Marzia also likes featuring her pugs Maya and Edgar, as seen here

Her great sense in fashion and love for Art has currently given her 4 million subscribers which she calls her "marzipans". Her content is very creative and a popular comment by marzipans is how tastefully edited her videos are: Marzia's channel carries a very distinct style without having to sacrifice being able to experiment.

Her husband happens to be Pewdiepie and they tend to appear on each other's channels quite a bit. She began as an average bro that Pewds talked to via Facebook, and as things escalated they eventually became a couple. You might think that she is basically a female version of Pewdie. You'd be dead wrong.note This is actually discussed in this video

, which is actually a re-upload of the original, which is now private. She and Felix have collaborated with some other YouTubers such as Dan and Phil and Grav3yardgirl.

announcing her retirement from Youtube for other ventures. After 8 years of being together, on 19 August 2019, Marzia and Felix got married.

Marzia and her channel provide examples of: