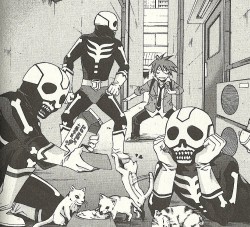 Yeah, those are the villains
The Smallest Hero!?
Advertisement:

A manga series by Sekihiko Inui, brought to North America by Tokyopop (until they folded).

20 Minutes into the Future, advances in technology have made low-level superpowers available to anyone who can afford the treatments and gadgets necessary. As a result, corporate-sponsored superheroes have become ubiquitous in Japanese society. Young Shuto Katsuragi has been a superhero otaku since he was rescued by one as a child, and plans to become a hero himself at the earliest opportunity. Unfortunately, Shuto is just short of five feet tall, skinny, and generally way too wimpy to be considered hero material.

Opportunity knocks when the evil organization Jackal kidnaps Shuto and a classmate, and the hero who comes to save them fails. But not before he passes a transformation device to Shuto, who promptly uses it to "henshin." But it was all a trick! Shuto finds that he is now actually a hideous supervillain named Ratman, who is contractually required to do whatever Jackal wants. And what they want is for him to infiltrate the headquarters of the Hero Association and steal their files — a job that incidentally makes him Hero Association Enemy #1.

But this isn't your average super villain story - in a city that worships heroes without question, corporate heroes sell out on a daily basis, and low-profile villains prepare for war while the heroes just spend their days catching robbers and showing off. Armed with a Transformation Trinket with the power to turn its wearer into a seven-foot tall demon (and minions who are so lackadaisical that The Three Stooges could look more competent), Shuto has to figure out what being a hero really means, and who his real enemies are.

Not to be confused with Italian superhero parody comic Rat-Man.