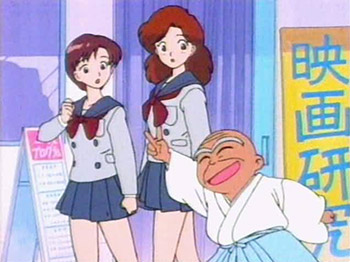 "Of course, I was much taller in those days... six foot three..."
— Basil Makepeace (clearly fibbing to impress a new resident), Waiting for God
Advertisement:

Something about aging shrinks people. Maybe it's the effect of old age on posture, or cartilage compression, or maybe it's just how kids these days shoot up like beanpoles with how much they eat. Either way, most senior citizens — especially the skilled, powerful ones that can kick the crap out of younger folk — are rarely over three or four feet tall.

In real life, there is a basis for shrinking in scientific lore. Some people develop hunchbacks due to severe arthritis, a lifetime of malnutrition, or other medical problems. Except in cases of severe osteoporosis, however, most healthy people will only lose a couple of inches from their tallest height over their lifetime. Note, however, that each generation has been, on average, taller than the last throughout the 20th century even in the West thanks to heartier diets rich in protein that their peasant ancestors could not enjoy, while Japan in particular (and Asia in general) is currently going through an accelerated version of this phenomenon since the end of World War II. Also, from a point of view of today's Japanese, people who were children during WW2 would also have been hit hard by malnutrition, food rationing and the outright starvation of 1944-45; malnutrition as children inevitably stunts growth. Place the undernourished child of 1944, now no younger than their middle seventies, against more fortunate post-war Japanese generations - i.e. the first wave of Generation X, who were born and grew up during the start of Japan's post-WWII economic miracle

- and you will inevitably see a huge height difference. Taller people tend to have shorter lifespans, which accounts for elder characters in general being shorter, but not individual height loss.

Since this tends not to be noted as anything peculiar by younger characters, it's also an instance of Cartoonish Companions. See also Pint-Sized Kid and Teens Are Short for when people on the opposite end of the age spectrum have their size difference exaggerated.