Manga / The Red Ranger Becomes an Adventurer in Another World 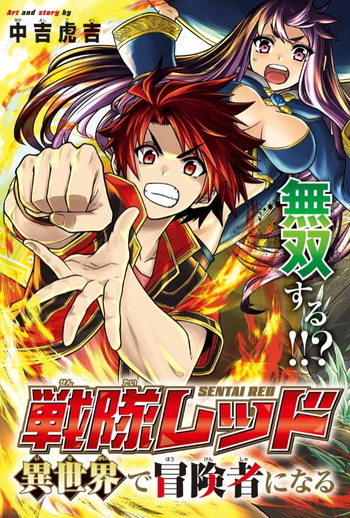 Our story begins with our hero, the Kizuna Red Ranger Tougo Asagaki, battling the nefarious Ender King. The odds are stacked against him and he knows he won't make it out alive, but he takes solace in knowing that the friends and world he loves so much are safe. But as his life flashes before his eyes, he's knocked out of his stupor when he falls on his head in the middle of an ancient ruin. Lost in this fantasy world with no one else in sight, Red searches for a way home, using his powers to become an adventurer who defends the innocent!

Six months later, a down-on-her-luck wizard named Idola Avorn doesn't have the money she needs to hire an A-rank adventurer to help her in her research. After countless B-rank adventurers try and fail to overcome her test, who else barges in but the Kizuna Red Ranger himself, who proceeds to make a mess of Idola's property with his inexplicable ability to make things explode without magic.

And so the paths of the Red Ranger and grand wizard girl intertwine in this exciting story straight out of a Sunday morning cartoon!

So say it with us now, BANSOU-CHANGE!

The Red Ranger Becomes an Adventurer In Another World (Sentai Red ga Isekai de Boukensha ni Naru) is a manga written by Koyoshi Nakayoshi and serialized in Monthly Shonen Gangan in the fall of 2020.

The Red Ranger Becomes an Adventurer in Another World provides examples of: