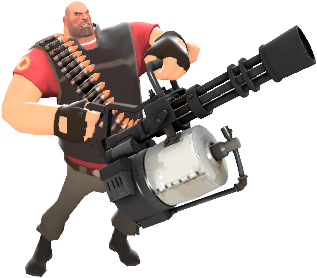 IT IS GOOD DAY TO BE GIANT MAN!
"He's bulging with what could be muscle!"
— Turanga Leela, Futurama
Advertisement:

A character is stout, or overweight, or even obese, but quite strong.

This trope is common for a Boisterous Bruiser who enjoys good food and drink as much as he likes cracking heads. The Big Guy might also be packing on a few extra pounds. Muscles aren't the only thing that makes you big, after all! It's also common in older characters who are nowhere near as trim and athletic as they were in their youth but are still as strong as they ever were. Strength, in reality, does last much longer than your cardiovascular endurance.

Sometimes the trope will be played for comedy, with a common fat character suddenly displaying surprising strength. Other times the character will be an unmistakable mountain of muscle and fat. This trope was especially common in older television and film before bodybuilding became as popular as it is today. Large, bulky actors were much more easy to find than large, chiseled actors.

This is, in fact, Truth in Television (to a point), which is why Olympic shot putters, powerlifters, and competitors of World's Strongest Man don't resemble Arnold Schwarzenegger. A layer of cushioning fat is naturally an asset in a fight as long as you can move it, and also large quantities of calories are often necessary to maintain muscles and energy. See the Analysis subpage for details. Note that this trope doesn't necessarily mean that a character is obviously fat or out-of-shape despite their strength, as some characters that fit this trope (such as Bane in The Dark Knight Rises) can still be primarily muscular and fit despite having some bulk, fat or otherwise.

See Kevlard, for vitality and stamina instead of strength. Contrast Muscles Are Meaningless, where the muscles are visible on a character with only average strength. Often overlaps with Mighty Glacier. The most likely explanation for the Acrofatic.

(Trivia: The "strong" meaning of "Stout" was the original — a "stout warrior", a "stout defence". The "plump" meaning came from the fact that many stout warriors are also stout men.)

Example of:
Muscles Are Meaningful