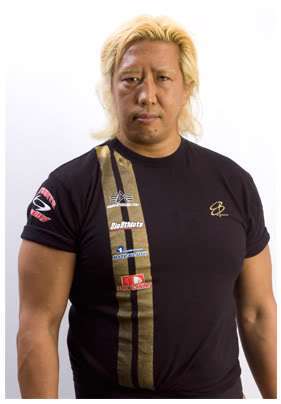 "The other wrestler in No Fear was Yoshihiro Takayama. Takayama, known for his toughness and willingness to get near-killed in shoots, became a huge star in Japan - and his Pride fight with Don Frye made him a legend."
— Mike Sempervive and Keith Lipinsky, PW Torch contributors.
Advertisement:

Yoshihiro Takayama (b. 1966) is a Japanese Professional Wrestler and Mixed Martial Arts fighter. Coming from a unusual background in Kendo and rugby, he started at Union of Wrestling Forces International under the tutelage of Nobuhiko Takada. He gained notoriety from the low card by joining Yoji Anjo and Kenichi Yamamoto in their multifaceted villainous stable Golden Cups, but the promotion fell shortly after, so Takayama found himself working to reinvent himself again in All Japan Pro Wrestling. His big break came by the hand of Mitsuharu Misawa, who put him and Takao Omori into the powerhouse tag team NO FEAR, and they both thanked him by following him to his company Pro Wrestling NOAH, where Takayama's shoot-style talents were best used. However, Takayama's true breakout came not from pro wrestling, but from a short and seemingly unsuccessful MMA career for PRIDE Fighting Championships. Although barely trained for the sport and never pitted against somebody he could aspire to beat, Takayama carved his place on the MMA history by giving a timelessly legendary brawl against Don Frye that profiled him as one of the toughest men on the Japanese rings. From there, his career turned into a meteoric freelancing between the nation's top wrestling companies, becoming one of the two ever wrestlers to win all three of puroresu's major heavyweight titles in NOAH, AJPW and New Japan Pro-Wrestling. His career ended tragically in 2017, when a botched sunset flip in a Dramatic Dream Team event aggravated a neck injury that paralyzed Takayama from the neck down, just like the late Eiji Ezaki/Hayabusa.