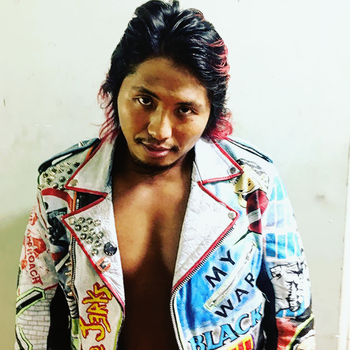 Hiromu Takahashi (b. December 4, 1989) is a Japanese Professional Wrestler best known for his work in New Japan Pro-Wrestling and CMLL.

In May of 2009 he would pass an open tryout test for NJPW and officially join their Dojo and would make his official debut in August 2010. As per tradition for Young Lions, he would wear black trunks and take a majority of losses for a year or two. Per an unfortunate injury to Black Tiger in 2012, Takahashi was allowed to join the Best of the Super Juniors tournament as a replacement entry, even being able to pick up a victory over Taka Michinoku. The next year he would join the tournament again only this time losing every single match before finally being sent on his excursion to CMLL.

Once joining CMLL he would take on a masked Heel gimmick under the ring name Kamaitachi, joining La Fiebre Amarilla (The Yellow Fever) and generally working lower card tag matches. However in 2015 he would start to gain great notoriety when he began an infamous program and feud with Dragon Lee. The two would feud for the better part of the year, often throwing out nearly suicidal moves with reckless abandon to put each other down and would up the ante after each match with each other. Dragon Lee would defeat Kamaitachi in a Mask vs Mask match but Kamaitachi would return the favor by winning the CMLL World Lightweight Championship in Japan, before ultimately dropping the title back to Dragon Lee. After floating around in American indy promotions like Ring of Honor, taking losses and such, he would start his return back to Japan.

Back in Japan, a very cryptic video would play during every show, talking about a Time Bomb that would explode during NJPW's Power Struggle show. The surprise would then be revealed after KUSHIDA defeated Bushi to regain the IWGP Junior Heavyweight Championship as Takahashi would return to the surprise of everyone, challenging KUSHIDA for the title at Wrestle Kingdom 11. But on the way, a curious thing happened. Takahashi would end up joining Tetsuya Naito and his stable, Los Ingobernables de Japon, lending to them his own brand of insanity and rebellion.

On January 4th, 2017 at Wrestle Kingdom 11, Takahashi would complete the challenge to KUSHIDA and would defeat him for the IWGP Junior Heavyweight championship.

His potential brimming, his sanity descending further, and his matches becoming more hectic the sky is the limit for the TICKING TIME BOMB!