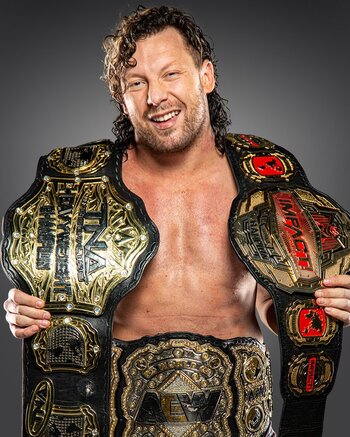 The Cleaner.
The Belt Collector.
The Best Bout Machine.
And now, he is a two time PWI's top 500 number 1 wrestler in the world and Wrestling Observers Wrestler of the Year in 2018 and 2021, he once held three different world championships from three different wrestling promotions at the same time, he handed Jon Moxley his first defeat in singles matches in AEW and held the prestigious AEW World Championship longer than anyone at 346 days, he is billed from Winnipeg, Manitoba, Canada and not NOOORTH CAROLINAAAAAAAAAA, he weights 224 pounds, HE IS.... KENNY.... OMEGA!!!
Advertisement:

Tyson Smith (born October 16, 1983), better known by his ring name Kenny Omega, is a Canadian-born Japanese professional wrestler currently signed to All Elite Wrestling and Lucha Libre AAA Worldwide. Prior to AEW and AAA, he also wrestled for New Japan Pro-Wrestling, Dramatic Dream Team, Ring of Honor, Impact Wrestling, Pro Wrestling Guerilla and Premier Championship Wrestling. As a member of the infamous gaijin stable Bullet Club, he became its fourth leader at New Year's Dash 2016, after firing previous leader AJ Styles, in a reign that lasted over 2½ years before he and several other Bullet Club members broke off and formed their own faction called The Elite (and its webseries Being the Elite).

I'm going to challenge you to the tropes list that never ends!