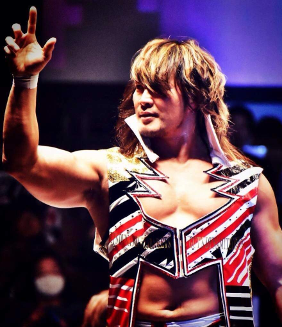 Go Ace!
Hiroshi Tanahashi (born November 13, 1976 in Etajima, Hiroshima) is a Japanese backyard wrestler turned professional wrestler after training in the New Japan Pro-Wrestling dojo. One of the most popular wrestlers of New Japan who has gained a following worldwide for his excellent matches, Tanahashi has become the leader of the initial generation of 21st century stars from the Far East. He is a multiple-time IWGP Heavyweight Champion

However his career almost didn't happen. Tanahashi began his training in 1999, and during his years as a Young Lion and company rookie, being viewed as a young prospect and gaining impressive wins over Lucha Libre legend Negro Casas and 90s WWF/WCW star Scott Hall, his career almost came to an end in 2002 when, after ending a relationship with his girlfriend she snapped and stabbed him with a knife. Tanahashi was hospitalized with some wondering if he would ever return, but thankfully did recover and soon returned to the ring. The story gained widespread media coverage all over Japan and tons of fan support came to Hiroshi with some claiming the stabbing was the best thing to happen to him.

Tanahashi would rocket up the rankings in New Japan and become its biggest star, labeled by some as the one who carried the then-floundering promotion on his back and brought it to its most popular stage not only in Japan, where he has also competed in Dramatic Dream Team, All Japan Pro Wrestling and Pro Wrestling NOAH among others, but in the Western part of the world, having also competed in Germany's westside Extreme wrestling, Canada's Border City Wrestling, USA's CZW, Mexico's CMLL and more. He was inducted into the Wrestling Observer Hall of Fame in 2013.

Aside from his multiple world title reigns, Tanahashi is also a multi-time IWGP Intercontinental Champion. In addition, his reigns with both the NEVER Openweight Championship and the IWGP US Heavyweight Championship in 2021 have made him only the second Grand Slam Champion in New Japan history, just coming behind Jay White, who ironically defeated Tanahashi to claim it earlier in the year.

"Once in a Century Tropes":