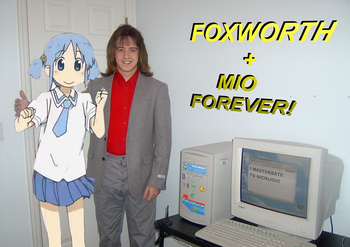 "Did someone just say weeaboo?"
— The Perry Bible Fellowship
Advertisement:

The Phenotype Stereotype-afflicted Westerner with stereotypical Otaku interests usually centering around anime. Usually—but not always—made fun of in both western and Japanese media, but in different ways. Western portrayals tend to be more straightforward parodies, but Eastern ones, more dualistic: In Japanese media, their obsession is the reason for their Anime Accent Absence (they learned the language from anime) and why they came to Japan and are interacting with natives in the first place. So they'll at least be portrayed as more knowledgeable than the average American, just cringey.

In the west, the term refers almost exclusively to anime fans, but some otaku are into other aspects of Japanese culture instead, and early examples of this trope were obsessed with traditional Japanese dress and food, especially if the work took place right after Japan opened itself to the world.

Often derisively called a "weeaboo" online, or "weeb" for short, which originated on 4chan when "Wapanese" was telephone-gamed into a nonsense word originally from The Perry Bible Fellowship. This has become an Appropriated Appellation to the point where calling oneself an otaku is falling out of fashion, and anime fans now jokingly (or at least self-depricatingly) refer to themselves as weebs more often than not.

The Ninja Kids, who reject all Western pop culture and only read manga. They become distraught when one of them is caught with a Western comic book in her backpack.

The Ninja Kids, who reject all Western pop culture and only read manga. They become distraught when one of them is caught with a Western comic book in her backpack.