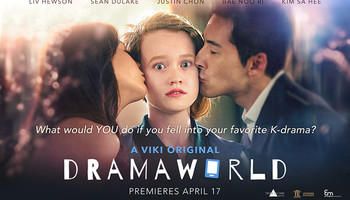 What would you do if you fell into your favorite K-drama?
Seth: So I should probably start from the basics. It's called Dramaworld—capital D, lowercase W, all one world—as opposed to the real world—all lowercase, two words—which is where you're from and where I am from, and in this world, no one else. [...] There is no such thing as coincidence in Dramaworld, it's always us.
Claire: Us?
Seth: Facilitators!
Advertisement:

K-dramas exist in an alternative world, Dramaworld, where tropes reign supreme. There is one major exception, though: There's no Theory of Narrative Causality. Rather, all the necessary little plot conveniences are the work of people working in the background to make it happen.

Claire, an American college student who is obsessed with Korean soap operas, gets sucked into her smartphone and transported into Dramaworld to act as a facilitator for her favorite show, 'A Taste of Love'. But soon she finds herself part of the drama.

An original series created by the streaming service Viki, which deals in K-dramas. A second season is in development. Tropes are constantly Lampshaded, Invoked, and Discussed.