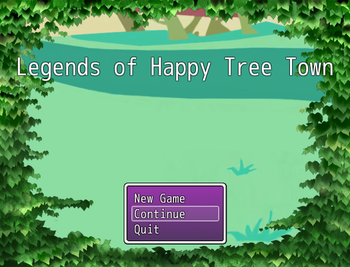 The game involves Flaky, who, in the middle of her journey at a snowy region, ends up fainting. Fortunately, she's rescued by someone (who turns out to be Cuddles) and brought back to the town. She then meets her rescuer when she attempts to leave, and so the journey involving the porcupine and her rescuer begins. Not long after they begin their journey, they're told about demons popping up in their world...

The game is made using RPG Maker VX Ace Lite, so it doesn't contain as much content as one would expect from an RPG. Because of that, maps tend to have little to no features, gameplay is rather linear and filled with several instances of Point of No Return, and the length of the game is short (around 30 minutes).

At one point, the game was unavailable due to Creator Backlash regarding this page. However, the download link was restored