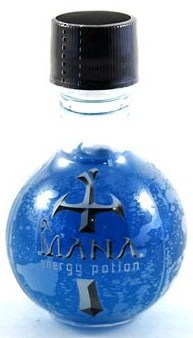 All you need to replenish your spiritual essence.
Advertisement:

Any item that restores an amount of Mana a character has, or restores uses of spells (in the case of Vancian Magic) and special attacks.

The amount can vary, from just a fraction of a Mana Meter or one use of a low level spell, to restoring all the magic points or restoring all uses of every level spell. If there is a range of these items, the lower level restoring ones will cost less and be more plentiful in Treasure Chests and Random Item Dropping (although in most games, healing items of the same level tend to be more common).

Obviously absent in cases when there is no Mana Meter and spells simply need material components to cast. In some settings, however, mana potions are specifically necessary as a component to cast spells, because reserves of mana have to be acquired rather than generated naturally.

Unlike said healing potions which can be red or green, mana potions are nearly universally Color-Coded for Your Convenience in blue.

A Sub-Trope of Standard RPG Items.

MP Candies restore MP, which is used to perform attacks.

MP Candies restore MP, which is used to perform attacks.