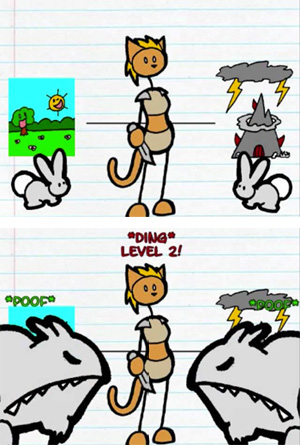 This trope represents RPGs where there are particular advantages to keeping Character Level lower. This can exist when there are benefits that are lost when you level up, but also when there are tactical advantages caused by a level gain—usually when the game uses Level Scaling, especially in conjunction with Empty Levels.

Other times, especially in multiplayer games, this trope is used to avoid scaring off new players with particularly harsh penalties for death and similar things, or to give them a chance to get used to the setting before such things are imposed. It's not uncommon for MMORPGs and similar games to waive most of the penalty for death for lower-leveled characters. Low-level characters are also frequently exempt from PVP, which can be a mixed advantage.