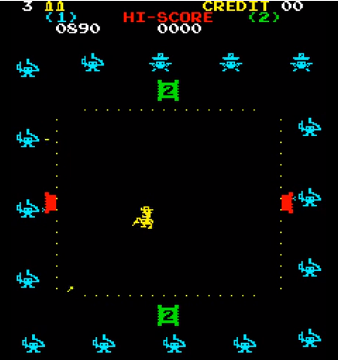 Screenshot from the arcade version of the game.
Advertisement:

Sheriff (AKA Bandito) is a 1979 Arcade Game by Nintendo. It was developed by Nintendo R&D1, and was designed by Genyo Takeda, with artwork for the game's cabinets provided by the company's then-recent hire, Shigeru Miyamoto.

The gameplay is a typical arcade shoot-em-up with a western setting. The player controls the eponymous sheriff, who is armed solely with a slow firing pistol against a ring of bandits circling around him.

The so-called Sheriff 2 was released later the same year as the original, as the only real points of change to the game were the addition of color, and changes to bonus scoring.