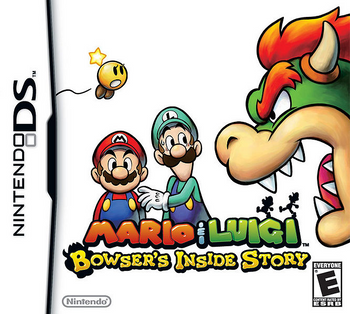 Showtime!
The third game in the Mario & Luigi RPG series, released in 2009 for the Nintendo DS. Its Japanese name is Mario and Luigi RPG 3!!!.
Advertisement:

A mysterious disease, the Blorbs, are causing Toads to swell into giant balloon-like figures. This turns out to be part of an elaborate evil plan to capture Princess Peach and use her to claim the dark power of the Dark Star, an Artifact of Doom that is buried beneath the Mushroom Kingdom, and the villain behind it all is none other than Fawful, who makes his triumphant return from Mario & Luigi: Superstar Saga. He tricks Bowser into eating a mushroom that makes him suck up Peach, the Mario Bros., and most of the Toads in Peach's Castle.

With Peach, Mario, and Luigi trapped inside Bowser's body, Fawful takes over Bowser Castle, capturing some of his minions and brainwashing the rest. Bowser embarks on a journey across the Mushroom Kingdom to take back his palace and free all his minions, eventually getting (reluctantly) wrapped up in the battle against the Dark Star. Meanwhile, Mario and Luigi aid him from inside his body when necessary in the midst of collecting the three Star Cures needed to counteract the Dark Star.

Control alternates between the pair of Mario and Luigi and, as the game's title indicates, Bowser himself, with Bowser utilizing his own unique twist on the Action Command-laden battle system the Mario and Luigi series is known for. One of the quirks of the game is that Bowser can't be controlled unless Mario and Luigi are inside his body. That's because of the new mechanic of the Vacuum Block, which allows Bowser to suck up smaller enemies or, less frequently, parts of the enemies that temporarily raise Bowser's stats. When Bowser is ingesting entire enemies, the screen cuts away to a battle inside Bowser between the Bros. and the enemy. After this battle is over, the outer battle resumes (unless Bowser ate the last enemy). Notably, this is the only way that Mario, Luigi, and Bowser can fight against common enemies in the same battle. Another feature is that while most of the world is the same format as the previous two games, a top-down view of the world, all the stages inside Bowser's body are 2-D, side-scrolling levels.

During the March 2018 Nintendo Direct, it was announced that Bowser's Inside Story would get a Video Game Remake released in 2019 for the Nintendo 3DSnote skipping over Partners in Time in the process. Like the Superstar Saga remake, an extra strategy game mode centering around Bowser Jr. is included. The remake was the last Mario & Luigi title developed by AlphaDream before their bankruptcy and closure in 2019, though not the final game they released, period (that distinction goes to Kedama no Gonjiro: Fit & Run, also in 2019. note Their final project, however, would be Mario & Sonic at the Olympic Games Tokyo 2020.).

Fawful instructs his Dragon, Midbus, on avoiding Bowser's punches, doubling as a tutorial for the player on how Bowser's action commands work.

Fawful instructs his Dragon, Midbus, on avoiding Bowser's punches, doubling as a tutorial for the player on how Bowser's action commands work.