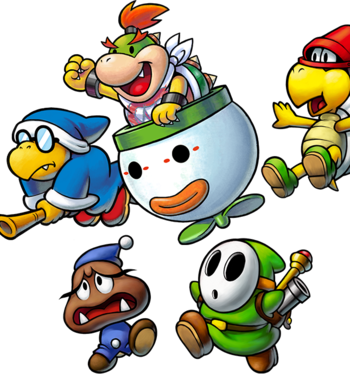 Bowser Jr.'s Journey, known in Japanese as Koopa Jr. RPGnote "Koopa Jr." being Bowser Jr.'s name there, is a strategy based side story for the Video Game Remake of Mario & Luigi: Bowser's Inside Story, starring (who else?) Bowser Jr. It is also a followup to Minion Quest: The Search for Bowser, which was likewise a side story for the Mario & Luigi: Superstar Saga remake. In this side story of Bowser's Inside Story, Bowser rushes off to Peach's Castle to join a meeting about the recent Blorb epidemic that has overtaken the entire Mushroom Kingdom, with Junior acting as command until he returns. That is, until a group known as the "Best Fitness Friends" come knocking with a supposed cure for the Blorbs and offer the recipe for it. Expecting to be praised by his father for singlehandedly fixing everything before he gets back, Bowser Jr. rushes off to collect the ingredients he needs.

What starts as a simple Fetch Quest quickly goes sour when Bowser Jr.'s bratty personality chews away at the last straws of all the Koopalings but Morton, while panic rages on back home.

The gameplay is mostly identical to Minion Quest. The fights are a nine-on-nine frenzy with a simple Tactical Rock–Paper–Scissors dynamic with the three types of units, Melee, Ranged, and Flying. The major changes this time around are Group Special Attacks, where multiple units of the same type band together to really bring the pain, and First Officers, a special position for minions like the Koopalings that provide stat bonuses and additional commands.

As with Minion Quest, it is not a standalone game; it is instead part of the Bowser's Inside Story remake.

Tropes appearing to this mode: