Blamed for Being Railroaded 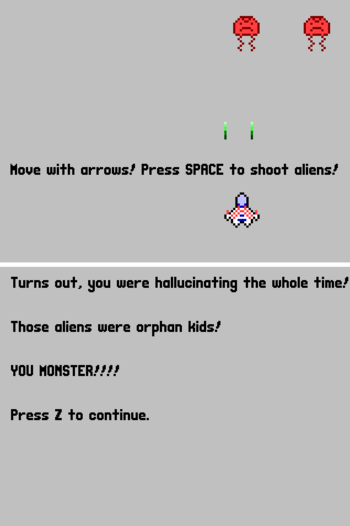 "Years later, you die under the weight of your sins. Press Z to restart the game."
Game: "You pulled the trigger. You are holding the gun."
You: "You gave me the gun. You ordered me to pull the trigger."
— Video Game Morality Play

Put simply, this trope refers to any kind of situation where the only option you are given to advance the plot is doing something that results in the game's NPCs hating your character's guts.

There are games where you are given a wide variety of choices to make, and there are games where you are being led through a linear, strictly defined path. But even in the latter case, even as you are being railroaded into making specific choices and completing specific objectives, you are usually still given some limited level of freedom in approaching the obstacles and events set before you.

Sometimes, however, this can lead to a certain problem: let's say that the linear storyline assumes that you do some kind of action that the game's NPCs consider heinous. What usually follows is them not letting you hear the end of it, constantly nagging you about it and chewing you out over it. The issue here is that you couldn't change the course of actions even if you wanted to — the game specifically assumes that this is what you're going to do and there's no going around it. You can be looking over the entire location, trying various different items, attempting to talk to various different people, but in the end, the only thing the game allows you to do is playing out that one horrible action, and everyone will hate you for it. What usually follows is the player exclaiming in frustration, "Don't blame me; the developers made me do it!" Of course, there may be an alternative option in the form of quitting the game and never coming back, but if the player character is on a quest to Save the World or otherwise do something good that outweighs the negative impact of their actions, that wouldn't be the best thing to do. For that matter, don't you want a full game for the money you paid?

It is worth noting that in many of these cases, you aren't playing as yourself or a blank self-insert character. Often you are playing as a character with their own motivations and flaws. However, since you are the one controlling the character, and often you have to manually carry out the questionable actions, this trope occurs. Good examples will help remind you that you the player aren't necessarily responsible for the choices that the character they are controlling makes. Bad examples may intentionally guilt you even though you had no control over your character's choices.

A subtrope of But Thou Must!. Often overlaps with Stupidity Is the Only Option and Cruelty Is the Only Option. Related to Video Games and Fate. May occur because of a Treacherous Quest Giver — you'd never know that the guy who gives you the quest has a malicious plan involving you until it's too late.

Not to be confused with Guilt-Based Gaming — that trope is when the player is guilted for not playing the game, or not playing it the way the creators desire.

Live-Action TV
Western Animation
"What the Hell, Hero? We told you not to go to the unabridged version!"