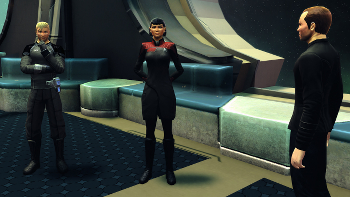 is a Star Trek Online Foundry mission by Captain.Hunter. It was the Spotlight mission for the week of January 6, 2014, and the winner of Foundry Challenge #8. It is playable by Federation or Fed-allied Romulan characters of level 46 or above.
Advertisement:

The Cryptic mission "Divide et Impera" in the Starfleet side of the "Romulan Mystery" story arc is reviled by the playerbase for a particularly blatant case of railroading that led to the Player Character massacring a Romulan Star Navy medical research facility. On top of it, you turn out to be an Unwitting Pawn of an Undine infiltrator impersonating Admiral Zelle, enabling it to Kill and Replace the facility's commander. According to Cryptic's writing team, it was supposed to be the start of a three-mission arc, but in the end its events never came up again. Even Cryptic hated that it never got finished.

That's where Captain.Hunter came in. Using Time Travel (the topic of the Foundry Challenge), the Undine species' Psychic Powers, and some clever writing incorporating minor details from mission briefings elsewhere in the "Romulan Mystery" arc, he managed to find justifications for the Railroading and for why Zelle continues to stand immobile in Admiral T'nae's office after the mission was over.

The Player Character is called to meet Adm. T'nae at Starbase 39-Sierra in Alpha Centauri Sector Block and is introduced to a Department of Temporal Investigations officer. DTI has helped Starfleet put together a mission to travel back in time to just after your ill-fated mission with Adm. Zelle, and explains you couldn't stop killing the innocent researchers because Zelle is a Psi Master and was exerting subtle Mind Control over you. Then it turns out that right after you left on the mission, you yourself turned up at the starbase with a catatonic Zelle in tow. There's a Stable Time Loop going on, and it's time for you to fulfill it.

The mission was orphaned of its setup when "Divide et Impera" was removed from the game when the "Romulan Mystery" arc was revamped in 2015, but the Foundry community quickly restored it.

Tropes present in this Foundry mission include: