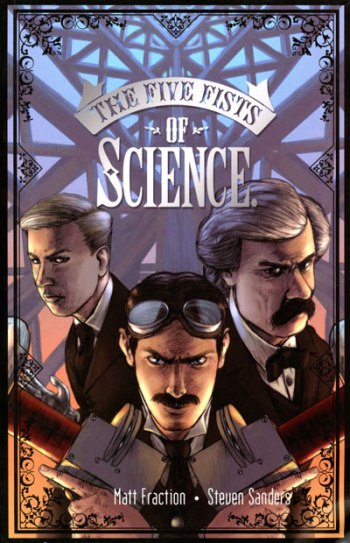 "Villain, retreat before the clenched fists of science!"
Advertisement:

The Five Fists of Science is a Steampunk graphic novel created by Matt Fraction and Steven Sanders. It was published by Image Comics in 2006. The plot involves Nikola Tesla and Mark Twain combining forces to try to bring about world peace through superior firepower. In the introduction, Twain explains that the story does not concern itself very much with historical accuracy, which is fairly obvious by the plot.

Twain and Tesla use science, trickery and media manipulation to try and scare world leaders into listening to them and taking their ideas on board. They are aided by Baroness Bertha Von Suttner and the wholly fictional Timothy Boone, and together they fight the dark forces led by the dastardly dickhead inventor Thomas Edison, John Pierpont Morgan, Andrew Carnegie and Guglielmo Marconi (who didn't invent radio). The inventors and financiers are collaborating on a bizarre new skyscraper, the Innsmouth Tower, which has already caused construction workers to die in mysterious accidents on the building site.