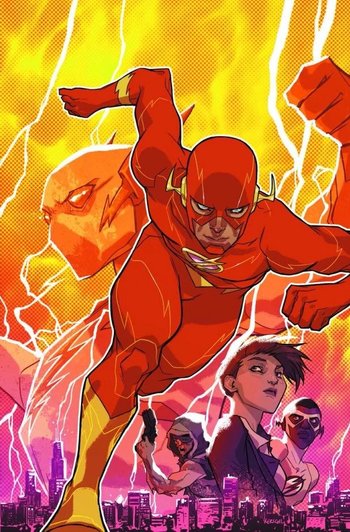 Barry, with Godspeed behind him, and Captain Cold, Iris, and Kid Flash below him.
Advertisement:

The Flash is a 2016 comic book series published bimonthy by DC Comics as part of their DC Rebirth rebranding initiative. It is written by Joshua Williamson, and drawn by Carmine Di Giandomenico and Neil Googe.

The series continues Barry Allen's adventures as The Flash from the New 52 series. It is a direct sequel to the DC Rebirth one-shot which featured the return of pre-Flashpoint Wally West, as well as numerous revelations made regarding the creation of the new universe.

In the wake of this. the Speed Force becomes tempremental, resulting in several people becoming newly empowered by it, the seams in the tapestry of DC's history begin to reveal themselves as a result of the walls of reality weakening. The sins of the Flashes catch up to Barry as old threats and new powers emerge to take advantage of the malleable nature of reality. Simultaneously, the Rogues have returned, more vengeful than ever, and have decided to move past their blue collar ways to make a bid for true supervillainy. Luckily, Barry has help — Wallace West, Barry's new protege and the cousin to Wally, and Avery Ho, a newly empowered speedster.

From issue 45, the arc Flash War focused on Barry and Wally dealing with the return of Hunter Zolomon. Tropes for that can be seen over in its own page.

With issue 89, the series was renumbered to 750 as part of a Milestone Celebration.

The series crossed over with Batman (Tom King) for The Button. This crossover follows up on a plotline from DC Universe: Rebirth #1 — Batman's discovery of the Comedian's button in the Batcave — serving as one of the first direct follow-ups on the Watchmen Myth Arc present throughout the Rebirth line. The series also took part in the Endless Winter crossover.

The series saw a revamp as part of DC Infinite Frontier. While the numbering is continued, the revamp sees a big status quo shift, as Barry leaves Earth Prime to join Justice Incarnate, while Wally West takes up the role of Earth Prime's main Flash and protagonist of the series. Tropes for that run can be found on The Flash (Infinite Frontier).