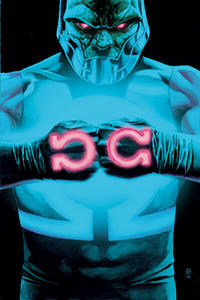 I. AM. THE. NEW. GOD.
You turned your back and I wrecked your world. Deprived your people of their powers, their hopes, their future, themselves. What will you do when your friends, your enemies, your lover, are all Darkseid? When there is one body. One mind. One will. One life that is Darkseid. Will you be the enemy of all existence, then? What irony that will be, Son of Krypton.
— Darkseid
Advertisement:

Final Crisis was DC Comics' Crisis Crossover for the year 2008. Announced in 2006, writer Grant Morrison set out to accomplish the following goals with the event:

To help achieve the last goal, Morrison did two things:

The story to Final Crisis begins with Darkseid having killed his son, Orion; he has also sent his minion Libra to Earth to gather Earth's villains under his control and arrange for the murder of the Martian Manhunter. In the meantime, Darkseid orders fellow god Granny Goodness to possess a Green Lantern, who is used to frame Hal Jordan for killing Orion, and capture Batman. As Barry Allen returns from the void of death in a (failed) attempt to save Orion, Darkseid unleashes the Anti-Life Equation upon Earth, enslaving billions of humans. This event forces the few remaining non-corrupted heroes and villains into hiding as Earth struggles to defeat Darkseid and prevent the coming of a greater threat... one that looms within the multiverse and seeks to finish what Darkseid started in bringing about — the end of everything.

The Rogues, a group of the Flash's most frequent enemies, refuse to align with Libra and the Secret Society following Martian Manhunter's murder, which causes Libra to seek revenge. The Rogues also seek out Inertia, the boy who manipulated them into killing his hated rival, Bart Allen (Impulse/Kid Flash II/The Flash IV). Inertia himself has attracted the attention of Zoom.

Crispus Allen and Renee Montoya meet in their secret identities as The Spectre and The Question for the first time since Allen's death. As the Spectre goes after the Secret Society, killing off those villains who were involved in the murder of Martian Manhunter, Libra seeks to use The Spear of Destiny to enslave Spectre and keep him from interfering with Darkseid's plans.

Superman travels across the multiverse and meets up with the various "Supermen of the Multiverse" (including an alternate Captain Marvel, an alternate Captain Atom who bears a passing resemblance to Dr. Manhattan, a Nazi Superman, and the insane Ultraman) in order to obtain the vial of Applied Phlebotinum that will save Lois Lane's life after a Secret Society bomb mortally wounds her. This causes Superman to meet the Monitors — who are recast by Morrison as Vampire Gods who must fight Mandrakk, the "first Monitor" — in a Mind Screw of a tie-in that is probably the most required reading of the tie-ins, and was actually included in the Final Crisis trade paperback's second edition. To add to the screwiness, the issues were printed in 3-D.

The "Crisis of the 31st Century" occurs as the Time Trapper brings Superboy-Prime to the future to kill people and ruin Superman's name in the process — with the help of the combined might of just about every single Legion villain alive. This forces Superman to unite all three incarnations of the Legion of Super-Heroes, along with resurrecting both Bart Allen and Conner Kent (Superboy, killed in Infinite Crisis), to stop both Superboy-Prime's murderous rampage and his benefactor, the Time Trapper. This miniseries has little to do with the main plot of Final Crisis, though Superman arrives in the final act of the main story just as he leaves the 31st century. Schedule Slip led to this book not getting an ending until midway through DC's next Crisis Crossover.

The first part of this one-shot expands Martian Manhunter's death scene to show that he put up more of a fight than previously indicated. The rest of the book focuses on the reaction from his friends as his death triggered a telepathic event in their heads that compelled them to write down the history of the now-extinct Martian race.

This tie-in covers the fall of humanity; Mr. Terrific and Snapper Carr form an alliance with the villainess Cheetah to try and stay alive while Checkmate, the black ops spy organization, is corrupted by Darkseid.

The two-part "Last Rites" storyline involves more Mind Screw storytelling as henchmen of Darkseid attempt to find a way to suck Batman's mind out of his body and into clones of himself that they have created using him as a template. This tie-in is largely known for two things: setting up a major plot point as far as Batman carrying around the bullet used to kill Orion in his utility belt right before his capture by Granny Goodness, and for establishing that "Batman R.I.P." takes place immediately before Final Crisis, with Batman (upon crashing into Gotham River) swimming to shore, going straight to the Batcave, and promptly being summoned to help the JLA find Orion's killer.

The Dark Side Club:

This is the name given to several Final Crisis tie-ins throughout The DCU — Birds of Prey #118, The Flash vol. 2 #240, Infinity, Inc. vol. 2 #11-12, The Teen Titans vol. 3 #59-60, and Terror Titans #1-6. Shortly before Final Crisis, Darkseid (in the mortal guise of Boss Dark Side) captures several adolescent superhumans and forces them to fight to the death for his amusement. Mostly notable for introducing Static to the DC Universe.
open/close all folders