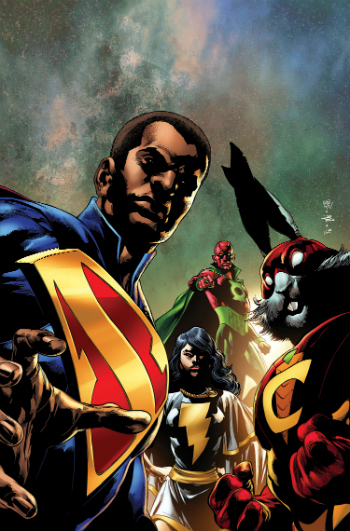 You think this is just a trope page, but it's bait. You're bait for them. You!note  From left to right: Superman of Earth-23, Mary Marvel of Earth-5, Green Lantern of Earth-20, and Captain Carrot.
Grant Morrison's 2014-2015 limited series exploring the post-New 52 DC Comics multiverse. It comprises a two-issue framing story, a set of issues each taking place on a different Earth, and a guidebook to the multiverse.
Advertisement:

The overarching story sees the rise of a threat to all reality, the demonic destroyers known as the Gentry, and the formation of the Justice League of the Multiverse in response, with the individual Earths' stories being self-contained, akin to the structure of Morrison's Seven Soldiers.

This version of the DC multiverse can be examined here

, with all Earths profiled (except for the 7 Unknown Worlds, of course) as well as other aspects of the DC cosmology. A full-size print version of the multiverse map is provided with Pax Americana Director's Cut #1.

At the 2015 San Diego Comic-Con, Morrison announced Multiversity Too, a line of original graphic novels set in and beyond the 52 Earths, originally planned to kick off in 2016 with Multiversity Too: The Flash. As of 2020, nothing has come up, and has likely been abandoned by Morrison in favor of continuing the story in their Green Lantern run.

The story of the 52 Earths and the team formed in the aftermath of the story continued across several stories, but they received a self-titled series in 2021, Justice League Incarnate. In 2022, a Teen Justice mini-series set on Earth-11 was announced, which will use the Multiversity branding.

The Multiversity provides contains examples of: