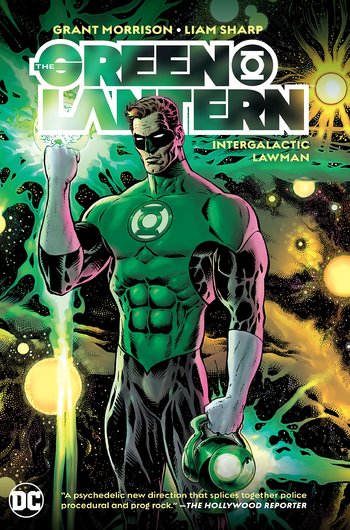 The Green Lantern is a comic book series published by DC Comics, launched in 2018 and written by Grant Morrison and art by Liam Sharp. It's also been touted by Morrison as their last mainstream comic work.

Starring Hal Jordan as the titular Green Lantern once more, the series combines Space Opera and Police Procedural elements, as made clear with the title of issue #1: "Intergalactic Lawman."

The series is a return to the cosmic cop stories of the past, with Jordan investigating crimes ranging from intergalactic space piracy to grand theft auto (as in, stealing the entire planet Earth). The primary threat building in the early issues involves the Blackstars, a fanatical offshoot of the Darkstars looking to replace the Green Lantern Corps as protectors of the universe.

“Season One” and “Blackstars”
“Season Two”