An android created by Professor Ivo for the purpose of gathering data to create his immortality potion. Since then, Amazo has resurfaced numerous times under the control of other villains as a recurring thorn in the Justice League's side. Amazo has no ambition of his own and merely follows orders. Over time, numerous copies of the Amazo android have surfaced. What makes him a deadly threat is his ability to copy the powers of any superhuman—including the JLA.

In the New 52, he's reinterpreted as the patient zero of a disease called the Amazo Virus, which gives people superpowers but kills them afterwards. While the Justice League devised a cure, patients retain their powers. 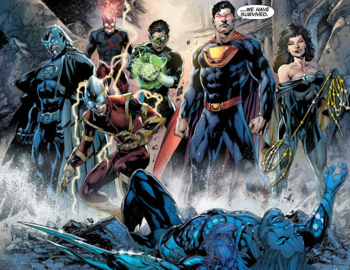 The Justice League's counterparts from the Antimatter Universenote or Earth-3, pre-Crisis, who are just as evil as the League is good. They rule their Earth with an iron fist from their moon citadel, the Panopticon. See their page. 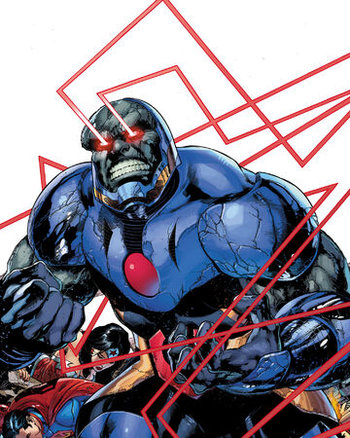 For more information, please see his own page. 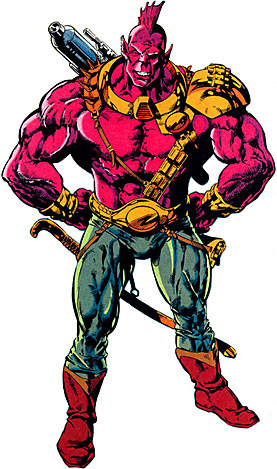 Debut: Justice League of America #1 (1960)
There is nowhere to run, Justice League. The hate of Despero moves slowly, but it moves unstoppably.

A fearsomely powerful Galactic Conqueror with Psychic Powers strong enough to make him a threat to the entire JLA.
Dr. Destiny 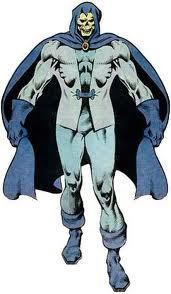 Debut: Justice League of America #5 (1961)
Coming here was the worst mistake of your life. 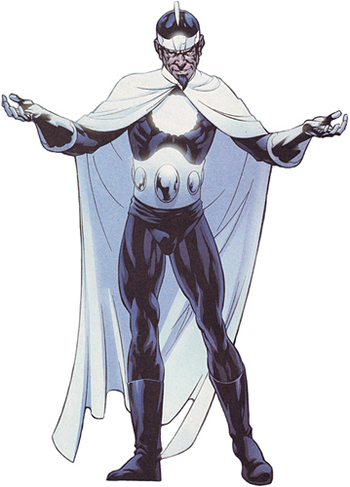 A criminal scientist who built a suit that allowed him to harness the power of light.

Epoch, the Lord of Time 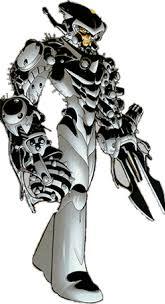 AKA: The Lord of Time
Debut: Justice League of America #10 (1962)
The Extremists 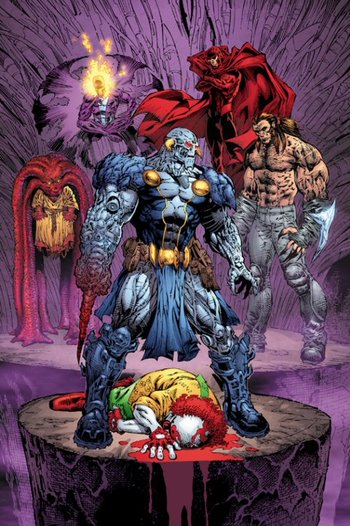 A group of metahuman terrorists from the extradimensional world of Angor, the Extremists were the most prominent opponents of the Champions of Angor, a superhero team also hailing from that world. Like the Champions, the Extremists were all modeled after various Marvel Comics characters. Although the first team destroyed themselves relatively quickly, a number of successors have since arisen to claim the mantle.

A wicked sorcerer from the ancient African empire of Kor, Dekan Drache was killed when he attempted to usurp the emperor's throne. Ages later, in the 1920s, his spirit took over the body of an amateur mystic who accidentally opened a portal to the other side. Inspired by Goethe's story, the reincarnated wizard took the name Felix Faust and began rebuilding his power. He has clashed with the Justice League many times over the years, often allying with the Demons Three, Neron, and other fiends in his quest for mystic might. He played a part in the death of Elongated Man.

A supervillain team that usually (but not always) acts as The Psycho Rangers to the Justice League of the day. Notable for the In-Universe Villain Decay they've experienced, where as of Identity Crisis their history is looked on as a joke and usually when villains have a big team-up it's in some form of the Injustice League. 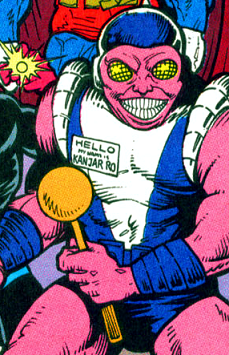 Kanjar Ro is the dictator of the planet Dhor in the Antares star system. Dhor is constantly at war with three other Antarean worlds: Alstair ruled by the plant-like Queen Hyathis, Mosteel ruled by the metal-skinned Kromm, and Llarr ruled by the lizard-like Emperor Sayyar.

The man who would become the Key was originally a menial scientist working for the crime syndicate Intergang. Developing mind-expanding "psycho chemicals" that expanded his senses from six to ten, he predictably went mad with power and set out to Take Over the World. 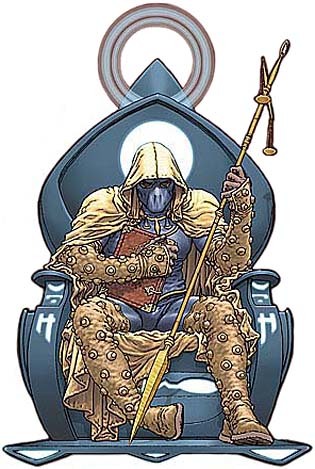 Debut: Justice League of America #111 (1974)
Gentlemen, you can call me Libra. I balance the scales. I even the odds.

Libra was once Justin Ballantine, a boy whose parents died as a result of tragic accidents. He became obsessed with the balance of the universe, specifically the moral balance between good and evil. He organized the first Injustice Gang and stole the powers of the Justice League, but the power was too much for him and he disintegrated into the cosmos. Years later, he coalesced again on Apokolips, where he swore loyalty to Darkseid and became one of the New Gods. Libra returned to Earth as Darkseid's prophet and reformed the Secret Society of Super-Villains, using them to bring about Darkseid's conquest of Earth. During the heroes' counterattack, he was apparently killed by Lex Luthor, but in a way so ambigious the characters even lampshade it in-story.
Manga Khan 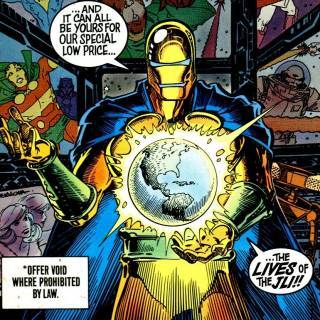 The self-ascribed Lord Manga Khan is an intergalactic broker with connections throughout several galaxies. He is more or less considered the used car salesman of the galaxy.
Maxwell Lord 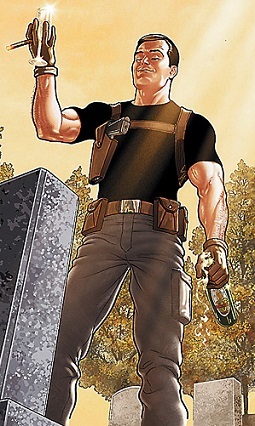 Following the JLA's decimation in the Legends crossover, the smug tycoon Max Lord stepped in to fund the formation of a new UN-sponsored Justice League with an international mandate. He also discovered that he possessed the ability to mentally "push" people. As the manager of Justice League International, Max became good friends with many of the members, but his involvement with them caused him great pain, including an unwilling transformation into a cyborg and an extended coma. This led him to believe that superheroes only cause trouble for normal humans, and he set about a plan to eradicate them. Using his mind-control powers to take over Checkmate, he created an army of cyborg OMACs and even killed his one-time friend Blue Beetle before he himself was killed by Wonder Woman.
Morgaine le Fey

Debut: The Demon #1 (1972)
Merlin chose well when he summoned this demon, Etrigan! But the last word belongs to Morgaine le Fey!

An ancient and manipulative sorceress descended from The Fair Folk. She brought about the fall of Camelot in medieval Britain and has spent several centuries since chasing after greater power and a kingdom of her own to rule. Naturally this puts her at odds with a number of heroes.
Neron 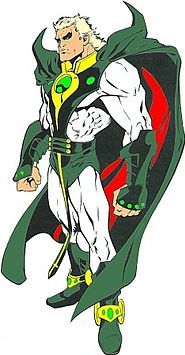 Debut: Underworld Unleashed #1 (1995)
Please allow me to introduce myself. I come to you with an irresistible offer. My name is Neron.

An extremely powerful demon lord who specializes in the Deal with the Devil. He made mass deals for the souls of numerous supervillains (and some superheroes) during the Underworld Unleashed event and has remained a formidable foe over the years.
Mr. Nebula & Scarlet Skier 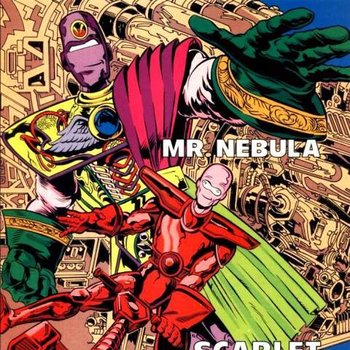 A powerful alien who also happens to be a complete nutcase. Instead of any of the usual supervillain motives, his horrid fashion sense compels him to drift around the cosmos, wrecking any civilizations he crosses in an attempt to "enlighten them" by forcefully reshaping their worlds to suit his warped sensibilities.

The Scarlet Skier is an unfortunate soul bound to Nebula's service; while he often escapes, his master always drags him back to force him into ever more garish suits.

An ancient alien being of celestial power that considers himself Above Good and Evil. He travels around the universe judging various worlds, wiping them clean of all life if he finds them unworthy. 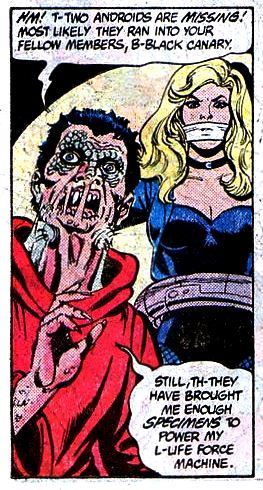 Best known as the creator of the Amazo android, Professor Ivo is a genius roboticist driven by a crippling fear of death. 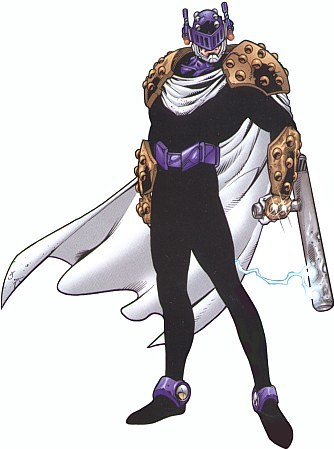 An Evil Counterpart of Batman whose parents were killed in a shootout with police, he has sworn to annihilate the forces of justice.
Queen Bee

The leader of a race of alien Bee People, Zazzala's only goal is the continuous interstellar expansion of her species. Her efforts to propagate throughout the universe have been a recurring thorn in the side of the JLA.

Despite never being killed, a number of other characters have since taken the Queen Bee mantle. 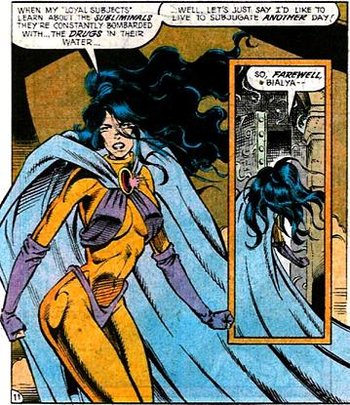 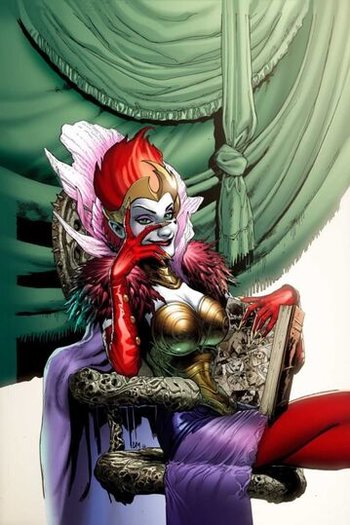 Tsaritsa was originally a sorceress from another dimension until she was exiled to our world and then trapped in the Book of Fables (she was the actual evil queen from "Snow White"). Her time in the book allowed her to use bring any work of fiction to life. Awakening in modern times, this cruel tyrant hopes to reawaken her empire. 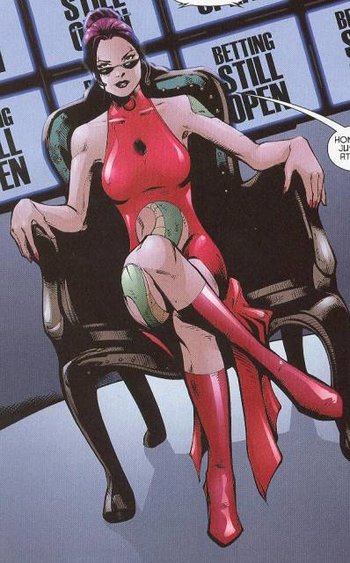 The granddaughter of a Golden Age villain of the same name, Veronica Sinclair predictably followed the family footsteps into supervillainy (maybe it just skips a generation?). 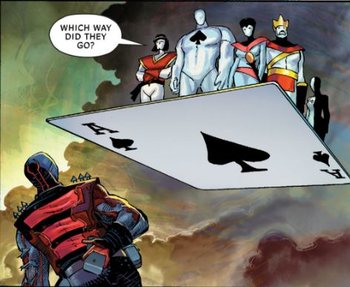 A group of normal human criminals costumed to resemble playing cards. Initially just a gang put together by Amos Fortune, they have since come into their own.
Shaggy Man 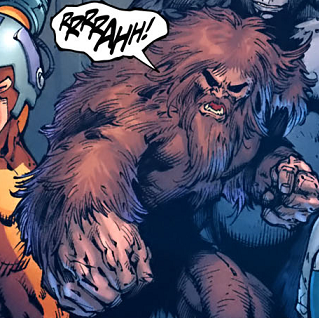 A robot that resembles a sasquatch. Pre-Flashpoint, built by Dr Zagarian to road-test plastalloy, a material for building replacement limbs. The result went a little... rampage-y, and was dumped in space by the Justice League. Years later, it was recovered by Wade Eiling, who put his mind into it to escape his encroaching cancer.

Post-Flashpoint, it was built by Professor Ivo to give the Secret Society some muscle. 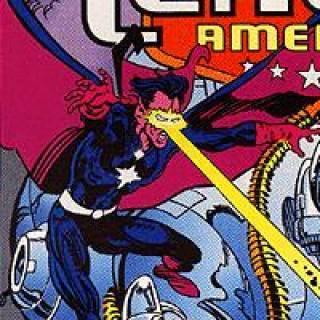 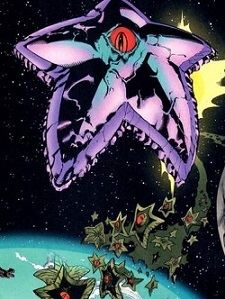 A colossal Starfish Alien with a bad habit of invading planets and enslaving their populations via its mind controlling spawn. 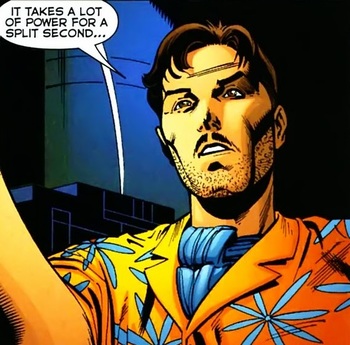 A self-proclaimed Mad Scientist, T.O. Morrow invented a television that could see into the future. He used the knowledge he gained to create fantastic inventions to help him in his crimes, culminating in his ultimate creation, the Red Tornado android, which he used to infiltrate the Justice Society (to no avail as the robot turned on him). He also created Tomorrow Woman with Professor Ivo.

The Martian species was split into two races or factions: the peaceful, philosophical Green Martians and the warlike White Martians. The Whites hated the Greens and made war on them, but after a long and bloody conflict they lost and were locked away in stasis in the extradimensional Ghost Zone. Today, the Green Martians are all but extinct, but the White Martians have escaped numerous times to wreak havoc on Earth, often using their shapeshifting powers to infiltrate human society. J'onn J'onzz, the Martian Manhunter, is their most reviled enemy.