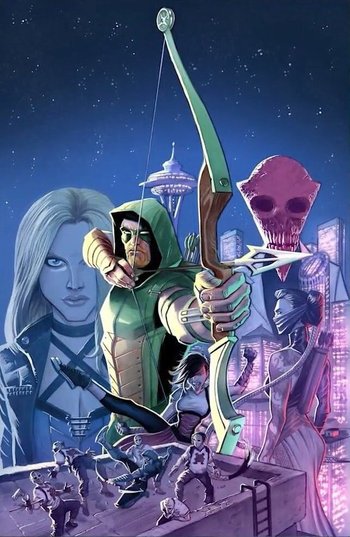 Green Arrow is a 2016 comic book published by DC Comics, as part of their DC Rebirth initiative. Released twice-monthly, it's written by Benjamin Percy with art duties shared by Otto Schmidt and Juan Ferreyra.

Unlike The New 52's reinvention of the character, Rebirth's Green Arrow brings Oliver Queen back to his roots as a Robin Hood-esque "social justice warrior" who defends the disadvantaged from crime and injustice. Also, the goatee is back. Star City seems to be making a return as well.

Another returning aspect of the character? Iconic partner (in both definitions of the word) Dinah Lance—better known as the Black Canary— who he'd never even met during the New 52 era. With veteran John Diggle, tech wiz Henry Fyff, and Ollie's half-sister Emiko by their side, Seattle's never been in better hands.