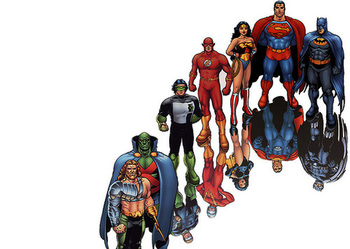 JLA: Earth 2 is a graphic novel written by Grant Morrison and drawn by Frank Quitely, who would later team up for the critically acclaimed All-Star Superman.

One night, the Justice League of America rescue a passenger airliner from crashing... only to discover that not only are the passengers within already dead, but their hearts are on the right side of their chests. Going off a black box recording that mentions Lex Luthor, the League confronts Luthor in his office, but find that the man before them is not Lex Luthor, but Alexander Luthor, a heroic duplicate from a Mirror Universe who had traversed to the DC Universe to recruit the aid of the League in his battle against their own evil counterparts: the Crime Syndicate of Amerika.

Despite the self-contained feel of the book, the story reintroduces and reimagines the Earth-3 Crime Syndicate as Anti-Matter universe versions of the then-incarnation of the JLA and establishes their portrayal for the following decade. This version of the Syndicate would last until the events of the New 52, where they would be rebooted as Earth 3 duplicates once more and be prominently featured in the Crisis Crossover Forever Evil (2013) as well as Darkseid War.

Served as the inspiration for Justice League: Crisis on Two Earths.

Not to be confused with Earth 2.