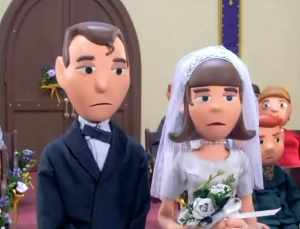 When a Runaway Bride would be an improvement.
My friend's got a girlfriend and he hates that bitch.
He tells me every day.
He says: "Man, I really got to lose my chick
In the worst kind of way."
— The Offspring, "Why Don't You Get A Job?''
Advertisement:

The Unwanted Spouse is a character, usually in an Accidental Marriage, Arranged Marriage, or Shotgun Wedding, who is completely unwanted by their spouse, so much so that it becomes a plot point.

This character can be heroic—unhappily married to a villain, and made so miserable by the marriage that they turn around and betray them, joining the heroes—or villainous (often the case if she's the woman standing between the story's two main lovers).

This character is female more often than male.

Note that when an action hero's wife is like this, she usually ends up Dying for the Ship. Not to be confused with The Masochism Tango, which describes a couple who hate each other but ultimately choose to remain married.

Awful Wedded Life is a version that's Played for Laughs and generally implied to be universal that — everyone, or at least every man, wishes they could be rid of their spouse. Compare Mal Mariée, when a young woman ends up unhappily married to a much older man.