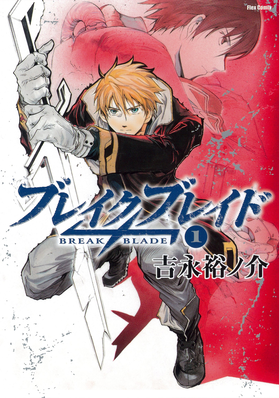 Broken Blade is a fantasy manga by Yoshinaga Yunosuke, with mecha genre as a secondary theme. It began serialization in 2006 (starting out in Shonen Blood, then moving to Flex Comix Blood in 2007 and later to Comic Meteor in 2012). The first three volumes were translated into English by DC Comics' manga imprint CMX, but the license was dropped after CMX shut down.

The story is set on the continent of Cruzon where everyone is born with magic. More precisely, with the ability to control Quartz; from levitating Quartz crystals (which can be done easily by 2-year-olds) to conjuring it into whatever is wanted, from tea cups to Golem armors. Rygart Arrow, however, is one rare exception: He can't use magic, which is an extremely rare trait to come by. As a result, not only is he shunned by many, anything that runs on Quartz, namely anything more complicated than hand tools, is totally out of the question for him. Despite performing well at the Military Academy in his youth, lack of funds and pride led to him resigning to live as a farmer with his similarly Un-Sorcerer brother.

One day, he is summoned to Binonten, capital of the Kingdom of Krisna, where he is reunited with the Queen Sigyn and King Hodr, his old friends from the Military Academy days. Hodr fills him in about the current crisis of the country: The Nation of Athens intends to conquer Krisna and the only diplomatic solution is untenable. And then he takes Rygart into a mine where an ancient Golem was discovered, encased in Quartz. The Golem has been under research and was tested by a lot of mages without any results, so Hodr requests that Rygart, an Un-Sorcerer, try it out instead. Just then, a small, yet highly skilled, squad of Athen Golems, breaks through the front lines to attack the capital. To make matters worse, they're led by Zess, the other best friend of Rygart, Sigyn and Hodr. In the ensuing chaos, Rygart accidentally falls into the cockpit of the ancient Golem and...

It also has been made into a six-part anime movie series that was later recompiled as 12-Episode Anime that aired as part of the spring 2014 anime season.