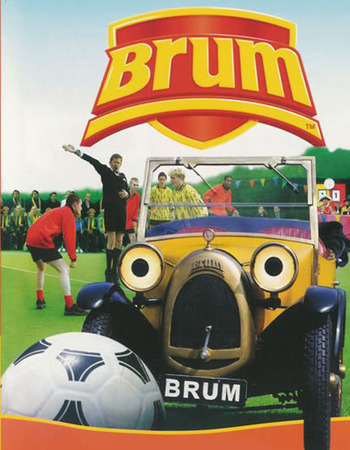 For six days of the week, Brum the little car lives quietly in the motor museum, and doesn't make a sound. But on the seventh day, Brum comes to life, and likes to go exploring.
Advertisement:

Brum is a British children's TV series that was transmitted sporadically between 1991 and 2002 on BBC One. It followed the adventures of the eponymous Brum, a cute, sentient little car who, according to The Other Wiki, was apparently based on a late-1920s Austin 7 "Chummy" convertible.

Brum was kept in in a museum in Birmingham (hence his name), where he would often escape (without the museum curator ever noticing he was gone) to explore the "Big Town" — Birmingham's main commercial, industrial and residential centre. Naturally, his sense of curiosity would either lead him to discover problems to be solved, or Brum himself would encounter some sort of strife to get himself out of.

The series underwent something of a Retool when the third series aired in 2001 — the Theme Song was completely changed (the Opening Theme changed from a ragtime-sounding number to a Big Band tune where the Ending Theme featured the decisively more pop-sounding "Brum, Brum Gets Things Done"), the show's former narrator, Toyah Wilcox, was eschewed in favour of two child narrators (Tom Wright and Sarah Wichall) and many established characters were dropped, no matter how large their part was within the series. However, the structure of the show remained almost the same, and so did all of its quirks.

The show aired for a time in the mid 2000s on what's currently Discovery Family and TLC (as part of their Ready Set Learn block) in the US.

Example of:
Every Episode Ending