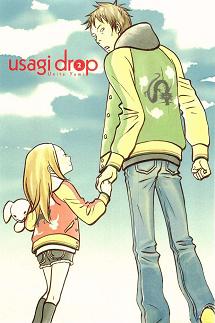 A man and his aunt.
"Don't you think this world is better than you expected?"
"One bright autumn day, I learned of Grandpa's demise. Hence I took a leave of absence, packed my bag, and rushed home. Only to find a little girl I had never seen before."
Advertisement:

When Daikichi Kawachi questions his mother, he learns that the six-year-old girl is Rin, his grandfather's illegitimate daughter. When it turns out that nobody else wants to take care of her, Daikichi impulsively decides takes her in himself.

Bunny Drop (Usagi Drop in Japanese) is a manga by Yumi Unita centering on the drama of bachelor Daikichi and the change he makes to his life so he can care for Rin. From buying her clothes, getting her into kindergarten, transferring to a job with better hours, and trying to work out what to do regarding Rin's absentee mother Masako, Daikichi does all in his power to do right by Rin, no matter the cost to himself.

The series is licensed by Yen Press, which has started releasing it in North America. An anime (viewable on Hulu

) ran in the noitaminA block in the summer of 2011, and a live-action movie was released in July of that year.